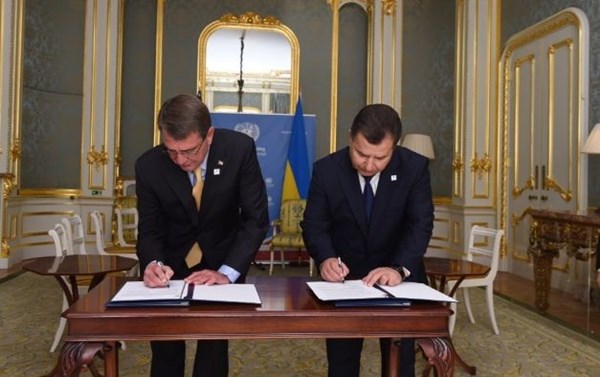 The Pentagon and Ukrainian Ministry of Defense signed an agreement on military cooperation, aimed at increasing the defense capability of Ukraine and the expansion of assistance provided by the United States to Kiev, the US Department of Defense reported on Thursday, September 8.

US Secretary of Defense Ashton Carter and his Ukrainian counterpart, Stepan Poltorak, signed a partnership agreement at a meeting in London, during which they also discussed the armed conflict in eastern Ukraine, the statement from the Pentagon press service says.

Among the objectives of the agreement are the increase of the defense capability of the Armed Forces of Ukraine, the promotion of major reforms of Kiev in the defense sector, and the strengthening of military-technical cooperation.

Speaking before the reporters, the Pentagon chief called the agreement “very, very important,” stressing that it will help the further development of Ukraine’s ability to protect its territory.

According to Ashton Carter, retired General John Abizaid, former commander of the Central Command of the US Armed Forces, will take over as a senior military adviser, and will oversee the sphere of military cooperation with Ukraine. “General Abizaid will provide authoritative advice to Minister Poltorak and other senior Ukrainian officials on the issue of reforms, to bring the Armed Forces of Ukraine in accordance with Western principles and standards, such as the strengthening of democratic civilian control over the armed forces, the transition to personnel structure compatible with NATO and the fight against corruption,” the US Department of Defense reported.