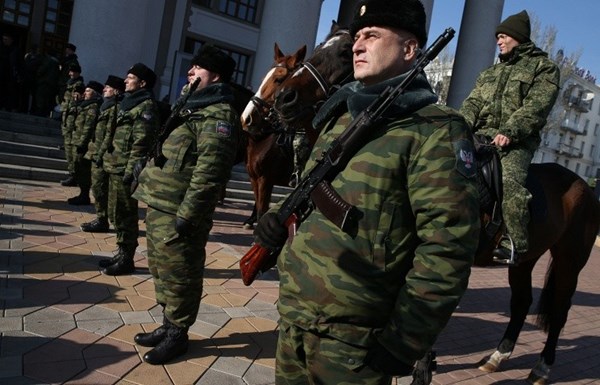 Pro-Russian separatists of the DPR and the LPR are trying to create a "political system that shows signs of a totalitarian regime" in the occupied territories, the head of the ATO of the Security Service of Ukraine, Vitaliy Malikov, said.

Social and living conditions as well as economic and humanitarian situations in the Donetsk and Lugansk regions which are occupied by militants, can be described as critical, Malikov said in an interview with ZN.ua. According to him, the fuel and energy sector, industry, transport infrastructure and housing have all been destroyed.

"Production volumes have been reduced to a critical level, equipment is being smuggled into Russia and legitimate banking and payment systems are not functioning. There is a significant shortage of consumer goods and violations of the rights and freedoms of citizens become systemic in areas controlled by the DPR and the LPR," Malikov said.

He noted that local residents have limited access to medical care, social services and benefits, and can't receive compensation for damaged, confiscated or looted property.

Ukrainian authorities, there is a growing discontent among citizens in the occupied territories.

"Leaders of the are aware of the spread of unrest, but under the patronage of their Russian benefactors are trying to create a political system with features of a totalitarian regime in these territories; they create security, law enforcement and special agencies that will form the basis of a police state," Malikov said.

The conflict in eastern Ukraine has been ongoing since the spring of 2014, when pro-Russian separatists began to seize administrative control throughout the Donbas region and conduct illegitimate elections. Now they are in control of the Donetsk and Lugansk regions. From September to October the situation in the Donbas was relatively peaceful, but in November the headquarters of the Ukrainian Forces began to report daily violations of the ceasefire by the separatists.

Russia denies its participation in the conflict in the Donbas, but Ukraine insists that all the successful military actions of the separatists were supported by the Russian army. This summer, according to the Ukrainian General Staff, there were around 9,000 Russian soldiers in the Donbas and around 45,000 more were situated near the border.