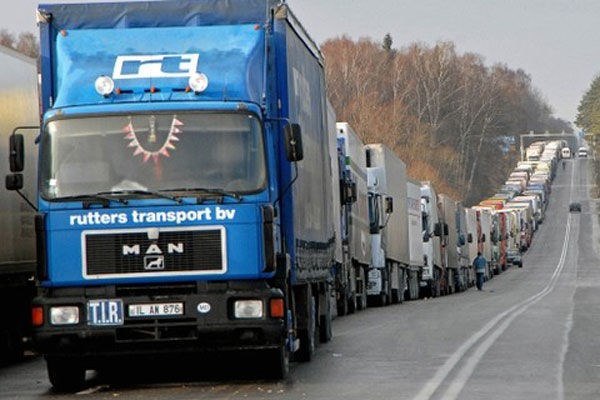 Ukrainian authorities announced the temporary suspension of road and rail freight shipments to and from Crimea. Earlier, Ukrainian President, Petro Poroshenko, appealed to the Cabinet of Ministers to halt the movement of goods between Ukraine and Crimea. At the same time, the Prime Minister, Arseniy Yatsenyuk, began to work out the list of goods which will be allowed to import to the peninsula in future. On the one hand, the decision of the Cabinet of Ministers to stop freights to Crimea was unexpected, as it was decided at an emergency meeting; on the other hand it was not all that surprising given the tensions between the two regions.

The President of Ukraine noted that he proposed these measures due to the significant escalation of the situation in the region. “Recently, the controversy between public activists and occupation authorities within Crimea has escalated. A number of criminal proceedings have been initiated against those instigating the embargos. It is the intent of these activists that a complete halt of all trade between Ukraine and Crimea be implemented,” stated Poroshenko.

Having accused Russia of disregarding the basic rights of Crimean Tatars, Poroshenko stated that these actions are causing tensions to rise across the peninsula. He also approved the creation of a work group to provide a comprehensive review of the termination of transport shipments and sales with Crimea.

During the same meeting, Ukrainian authorities also addressed the recent breaching of the country’s power supply. In particular, Arseniy Yatsenyuk, who approved the contract that supplies Crimea with energy from Ukraine, demanded the prosecution of those responsible. “As for future freight shipments, an approved list of importable goods will be defined in the near future. As long as this list complies with Ukraine’s interests, I encourage Majlis of the Crimean Tatars ensure this decision is mutually beneficial,” noted Yatsenyuk.

It was learned late last week, after the appeal to Petro Poroshenko by pro-Ukrainian leaders of Crimean Tatars, that Ukrainian authorities were ready for such a radical step. Transport flows to the peninsula have been paralyzed since September and the Government just re-established the status quo. Meanwhile, according to data from the Minister of Economic Development and Trade of Ukraine, Aivaras Abromavičius, Crimea was supplied with goods totalling $765 million already this year.

45% of this amount was imported electricity and the rest of it was food products and consumer goods. Earlier, Crimean authorities stated that the disruption of supplies from Ukraine does not affect the range of products available to Crimean consumers as almost all goods are imported from the mainland. “Chaos at the Ukranian border will not create negative consequences for the Crimean economy, including food products. 95% of the Republic’s imports are from Russian and domestic sources; the ability to replace the remaining 5 % is only a matter of time,” stated the Head of the Crimean Parliament, Vladimir Konstantinov.

This was made possible after the reintroduction of the Kerch Strait into the transport routes into Crimea. Konstantinov noted that any attempts to damage the peaceful way of life on the peninsula are in vain. He added that activists cannot stop the steady development of Russian Crimea. Rosselkhoznadzor, which actively blocks supplies coming from Ukraine, banned the import of about 27 thousand plant products for seven months of the current year. That represents about 15% of the total volume of supplied goods.

The blockage of Crimea may not affect the product range on the local counters but it affects the prices of those goods significantly. Ukrainian products are generally cheaper by 30-40%. Organizers of the trade blockage noted that they are planning to fight against smuggling, which has become a very profitable business as consumer prices increase. However, Crimean Tatar activists, who support and uphold the blockade, have made political demands which are unlikely to be implemented.

The problem with the power supply, which now exists after the destruction of two PTL (Power Transmission Lines), has brought the most significant harm to residents and authorities. The loss of energy supplies caught the region’s authorities unprepared. Crimea can do without Ukrainian products but they can’t replace electricity until the power bridge from the territory of Krasnodar Region is installed. The construction is expected to be finished in mid-December at best.

It is important to remember that Ukrainian carriers have had some difficulties getting into Crimea in the past. Last September, severe traffic jams occurred on the border of the Kherson region and Crimea, at the entry of the peninsula, due to long and frequent inspections of Ukrainian residents’ cars and trucks by Russian border guards. The line of trucks and cars near the border control station in Kalanchak stretched for 10 km and near Chaplynka it was 4 km long.

In the end, some cars had been waiting at the border for three days, leading to serious disruptions of product supplies to Crimean stores. The Head of the Republic, Sergey Aksyonov stated that corruption is rampant along the border with Ukraine. According to him, carriers had to pay between $3,000 and $5,000 in order to pass in any direction.

By the end of April 2014, the huge 15-17 km-long jam had been created as Russian border guards started to input all passport details in an electronic database, issue migration cards and initiated the lengthy inspection of items and documents. The same situation took place again in July.  At that time the State Border Service of Ukraine accused Russian authorities of promoting these practices.

“Long jams were formed as the result of unnecessary actions by the Russian border guards towards those travelling to Crimea from the mainland of Ukraine, created by the ill-conceived decisions of new Crimean authorities,” stated the agency. Meanwhile, local residents benefited from these difficulties. They helped drivers get directly to the checkpoint for $17. It’s noteworthy that during the summer of 2015, multikilometre jams from the flow of tourists appeared on both sides of the Kerch Strait.

Ferries, which were in use as well, couldn’t manage the workload during peak periods. Therefore, the queue of drivers from each side, reached almost 3,000 cars. Additionally, in August, almost 860 trucks were waiting on the distributing platform, referred to as “Kerch Airport”, and more than 750 trucks were waiting from the Krasnodar side. The long wait and accumulation of cars led drivers to stage a brief protest.