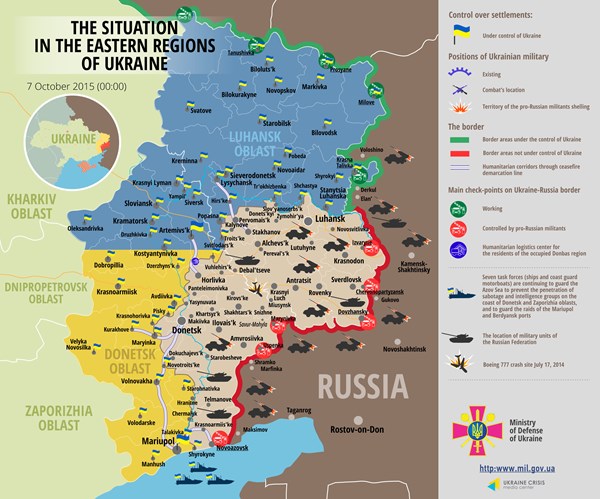 As stated by Oleksander Turchynov, secretary of Ukraine's National Security and Defence Council, at least nine ceasefire violations, committed by the Russian-terrorist troops, were recorded in the occupied territories over past 24 hours.

The commentary of Secretary of the National Security and Defense Council of Ukraine Oleksandr Turchynov was posted on the official website of the Council.

"It it not the first time that the Russian-backed militants want to disrupt the Minsk Agreements by their actions", he said. "However, in contrast to previous provocations, the fire was aimed and of high intensity. As a result, five soldiers were wounded."

The NSDC Secretary said that the weaponry withdrawal by the Ukrainian side would be stopped in case of further attacks on the Ukrainian positions. "If the Russian-backed troops continue opening further provocative fire threatening the lives and safety of the Ukrainian military and civilians, Ukrainian weapons and military equipment will be immediately returned to previous location and the Ukrainian servicemen will act in accordance with the existing challenges by Russian occupiers," Turchynov stressed.

The war in Ukraine's eastern Donetsk and Luhansk regions has killed more than 8,000 people since it started in mid-April 2014.

A ceasefire has broadly held since September, but today International monitors in eastern Ukraine reported a sharp increase in gunfire along front lines near the airport of the rebel-held city of Donetsk.