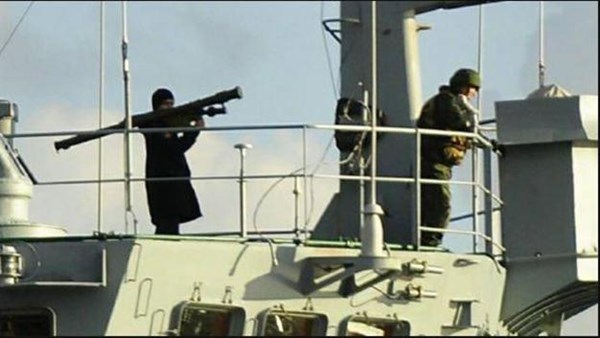 As reported by Hurriyet Daily News of Turkey, a Russian warship passing through Bosphorus en route to the Mediterranean on Dec. 6 brought an angry reaction from Turkish Foreign Minister Mevlüt Çavuşoğlu. A russian soldier was seen in footage of the boat holding a ground-to-air missile in the shooting position.
“This is provocation, this is a harassing passage,” Çavuşoğlu told reporters on Dec. 6 in his hometown Antalya.
“The Russian warplanes’ violation of our airspace and the passing of the Russian warships through the Bosphorus are two very different things,” he added, referring to the Montreux Convention regarding the regime of the Bosphorus and Dardanelles straits.
“The passages should be made in accordance with the international agreements, whether it is a Russian ship or of another nationality, the rules have long been determined,” Çavuşoğlu said. He added that the “necessary answer will be given in situations deemed to be a threat. The showing off of a missile by a soldier on a Russian warship, or other things such as anti-aircraft weapons, is pure provocation. I hope that this is an isolated case. It is not the right approach,” he said.
Relations between Russia and Turkey have deteriorated after Ankara shot down a Russian warplane near the Syrian border for violating its airspace.
Tensions have increased with the naval build up in the eastern Mediterranean, with Russian warships constantly sailing through the Turkish straits to travel to and from the area.