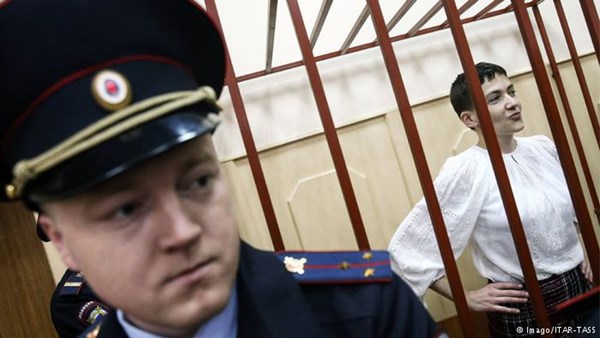 On the 2nd of March, during the debates of the parties in the Donetsk City Court, the State Prosecutor asked the court to sentence Ukrainian pilot, Nadiya Savchenko, to 23 years in prison in a penal colony. The State Prosecutor noted that evidence of the prosecution was sound and was confirmed by the case materials and therefore sufficient to find Savchenko guilty.

“Having military training, the prisoner presented herself to serve in the Aydar Battalion where she entered into a criminal arrangement with the Chief of the battalion and his fighters. Criminal acts were committed in a generally dangerous way,” the State Prosecutor said.

According to him, the crimes were committed by the prisoner due to hate and hostility of the residents of the Lugansk region and citizens of Russia. During the debates, Savchenko apologized for emotional behavior.

“I want to apologize for my behavior. It is hard to hear lies for six months,” the prisoner said.

Savchenko is ready for a new hunger strike

According to the investigation, the officer of the Armed Forces of Ukraine, Nadiya Savchenko, was a member of the Aydar Battalion near the village of Metalist, Slovianoserbsk district, in the Lugansk region.

There, she carried out secret surveillance missions and worked on the artillery shelling of a checkpoint created by Lugansk separatists, where civilians were killed. The civilians included three Russian correspondents of the All-Russia State Television and Radio Broadcasting Company. Two of them – Igor Kornelyuk and Anton Voloshin - were killed as a result of the shelling.

According to Savchenko, the journalists failed to follow safety rules. “They weren’t wearing bulletproof vests and helmets when they died,” Savchenko said in court. The officer of the Armed Forces of Ukraine added that everyone’s guilt was proven during the trial except her own. Savchenko denies the accusations made against her. She has been held in detention in Russia since July 2014.

On the 17th of December 2015, during a hearing before the Donetsk City Court, Savchenko declared a hunger strike to last until the end of her trial. Recently, Savchenko’s lawyer, Mark Feygin, said in an interview with Deutsche Welle that Moscow isn’t interested in delaying of the case the Ukrainian pilot.