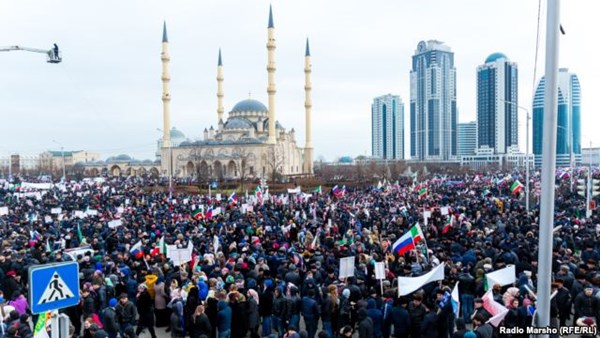 On January 24th, police in Dagestan blocked an attempted demonstration rally by followers of Murtalzaliev, who was declared wanted in connection with terrorism. One of the organizers, Ahmed Pasha Amirilaev, reported in his interview with Ekho Moskvii that the police had stopped people who supported Russian President Vladimir Putin and the head of the Chechen Republic, Ramzan Kadyrov. Amirilaev did not confirm information that police officers tore up posters of Putin and Kadyrov.

The Dagestan online newspaper Draft reported that the police blocked convoys of motorists, which were formed for the demonstration. More than a thousand motorists from different parts of Dagestan and from Chechnya were planning to participate in the rally. However, having noticed that exits from the cities were blocked, some people began to go home.

On the 22nd of January, a rally in support of Putin and Kadyrov was held in Grozny. According to Grozny-Inform, more than one million people took part in this rally. A few days before, the document of the Ministry of Chechen republic on national policy came into the possession of the Vice Chairperson of PARNAS (People’s Freedom Party), Ilya Yashin. Having examined the document, Yashin wrote on his Facebook page that people were obliged to come to the rally in support of Kadyrov in Chechnya. Government officials sent letters on official forms with a requirement to guarantee attendance. They also attached the list of posters with approved slogans, which demonstrators were required to make.

Afterwards, Alexei Navalny filed a complaint with the Investigative Committee against the organizers of the rally, claiming that they violated the provision of the Criminal Code that prohibits forced rallies.