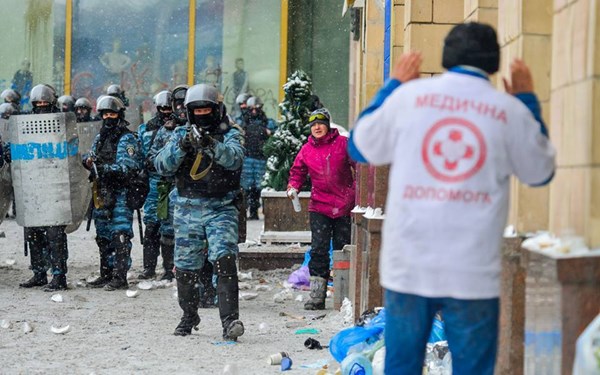 In Kyiv, five employees of the Berkut special police force who are accused of shooting Euromaidan activists in 2014 are being tried. Despite this, Russia and the DPR (Donetsk People's Republic) have included them in the prisoner exchange list. The Russian Federation has also granted citizenship to another ten who are wanted in Ukraine.

Advisor to the head of the Security Service of Ukraine Yuriy Tandit confirmed that the DPR wants to exchange the accused Berkut special police members through the prisoner exchange program. However, he did not specify how many of them were included.

"They are also being asked for [the exchange]. But our position is such that we should not release those people who have no relation to the events of this undeclared war [in the Donbas]," Tandit said. It is about such former employees of Berkut as Pavlo Abros'kin, Serhiy Zinchenko, Oleksandr Marinchenko, Serhiy Tamtura and Oleh Yanishevskyi, who are accused of the murder of 48 participants of Euromaidan. In relation to these persons, on January 18, the Svyatoshinsky District Court of Kyiv granted the prosecution a motion for the extension of a preventive measure of detention until March 17.

At the same time, the adviser to the Minister of Internal Affairs of Ukraine, Zorian Shkiryak said that Russia has included five former employees of Berkut in the prisoner exchange list. Shkiryak also stressed that Ukraine will not go for the exchange of former Berkut employees and that the SBU agrees with this position. "Murderers of the Heaven's Hundred have no relation to the war with Russia," Shkiryak said.

Earlier, the presiding judge in this case, Serghiy Dyachuk said that the court is considering the possible release of former members of Berkut special police force, Pavlo Abros'kin, Serhiy Zinchenko and Serhiy Tamtura in connection with the request of the so-called DPR on their exchange. According to him, the dates of birth of former Berkut employees in the list [previously published by Savchenko] do not match with existing records, but it was clear that they were certainly talking about these people.

During the Berkut employees’ trial, prosecutor Roman Psyuk said that ten fighters, including their commander Dmitry Sadovnik who are also accused of crimes on Maidan (Ukrainian Revolution of Dignity) received Russian citizenship. The Ukrainian Prosecutor's Office was informed about this by their Russian colleagues.

In 2014, the Prosecutor General's Office of Ukraine (GPU) handed over to the court the criminal case against the former Berkut servicemen Zinchenko and Abros'kin suspected of shooting participants during the Revolution of Dignity. On February 10, 2016, the GPU announced the completion of the investigation and sent to the court criminal case against three other former Berkut employees Marinchenko, Tamtura and Yanishevskyi. According to the GPU, these persons are charged with committing a terrorist act, abuse of duty, murder, attempted murder, obstruction of peaceful assembly and association, stealing and concealment of weapons after committing the crime. The criminal proceedings against every suspected former serviceman of Berkut are combined into one case. Over the course of seven months of hearings, investigations were made into 47 incidents, including 24 murders and 23 attempted murders during the Maidan.