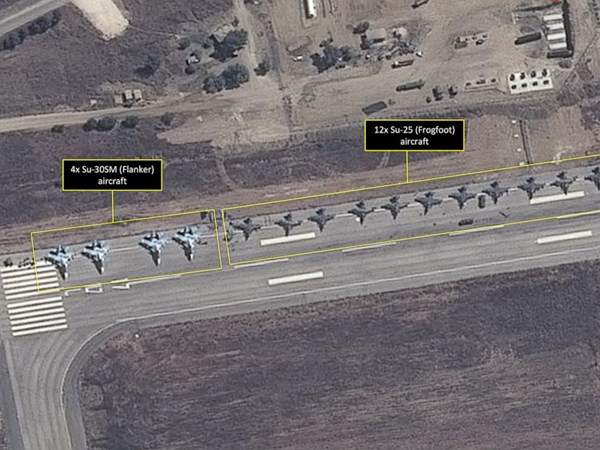 Both Ukrainian and foreign media reported today that satellite images published by the US private intelligence firm "Stratfor" show a significant build-up of Russia's military presence in Syria.
According to InformNapalm.org analysis the military aircrafts seen in Syria belong to the units of the Eastern Military District of the Russian Federation.

The main activity of the Russian military is observed on the Russian air base near the town of Hamimim Latakia and Tartus seaport.

It is notable that the exponential increase in the activity of the Russian Federation in Syria sharply increased in anticipation of the key meeting of the UN General Assembly. It's probable intention is to refocus the world's attention from the East European front to the Middle East. In this regard, the occupied Crimea begin to play an important role in solving the problems associated with the increased tension in Syria, since it is from the military base in Sevastopol that large landing ships of the Black Sea Fleet of the Russian Federation carry out transfers of personnel and equipment.

Thus Russia continues to manipulate the international community, by means of military intrigue and alternating the active phases of the military operations between the Eastern Ukraine and Syria.
At the moment, Russian military pressure provokes a steady increase in the influx of Syrian refugees in the EU, forcing Europe to make concessions on the issue of military and political cooperation. But under this scenario another spiral of tension and outbreaks of military activity of Russian troops in Ukraine, it is only a matter of time.
If the world leaders show weakness and lack of tough stance against the manipulations of Kremlin, the conflict in Ukraine might break out with renewed vigor.