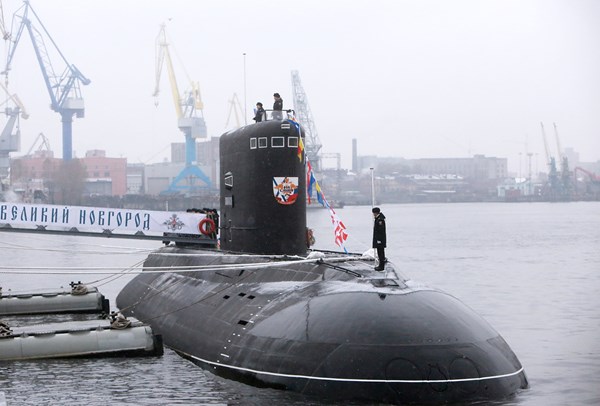 In 2017, the Russian military will relocate three Varshavyanka -class submarines, armed with Kalibr cruise missiles, from the Baltic Sea to the Black Sea, Interfax reports.

"By the end of the year, we plan to complete the tests and transfer from the Baltic to the Black Sea Fleet three other submarines of the same type: the Krasnodar, the Kolpino and the Velikiy Novgorod," the Black Sea Fleet information department reported.

According to the department, the first three Varshavyanka-class submarines built for the Black Sea Fleet, the Novorossiysk, the Rostov-na-Donu and the Stary Oskol have already arrived at the site of permanent deployment.

The crews of these submarines took part in the solemn Sunday rally dedicated to the 111th anniversary of the Russian Submarine Forces.

The Varshavyanka-class submarines are also known as Project 636.3 subs, belonging to the third generation of Projects 636 and 877. They are considered some of the world’s most silent submarines, earning them the Western nickname “black hole.”

Previously Korrespondent.net reported that three Project 22800 class missile ships, also known as Karakurt corvettes, will be built in Crimea. The construction will be conducted at the nationalized More Shipbuilding Yard in Feodosia from 2018 to 2020.