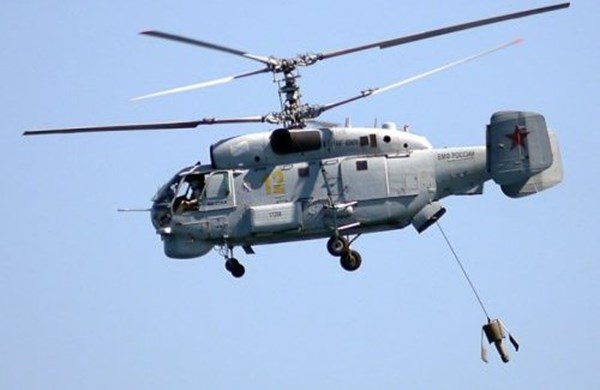 Helicopters from the airborne unit of Russia’s Black Sea Fleet conducted exercises that were designed to find enemy submarines that might be in the Crimea. This was reported by the press service of the Russian Defense Ministry.

“Scheduled training exercises of the crews of Ka-27 and Mi-8 helicopters were held in the Crimea with the participation of servicemen and local personnel of the air commandant’s office together with the regiment of Naval Aviation of the Black Sea Fleet,” stated the report.
It was noted that during the flight exercises, the helicopter crews conducted drills to find enemy submarines that could be in the area.

According to the report, training in organizing safe helicopter flights was conducted providing them with communications and the necessary data for flights. The personnel worked on the deployment of a separate radio transmitting station, which makes it possible to provide radio technical support to aviation units. Ka-27 helicopters made a series of landings and take-offs from the airfield under the cover of Mi-8 helicopters.

On April 15th, it was reported that Russia’s Black Sea Fleet was conducting testing and tactical exercises of the brigade of ships guarding the coast near the Crimean naval base on the training grounds at the Black Sea. In early April, the Black Sea Fleet of Russia conducted artillery fire drills at sea.

On March 24th, a large-scale command and staff exercise, including three formations of the Russian Airborne Forces, was conducted in the Crimea. This was done at the Opuk test range under the command of Airborne Force Commander Colonel-General Andrey Serdyukov.

The General Staff of Ukraine called the Russian military exercises in the Crimea illegal.