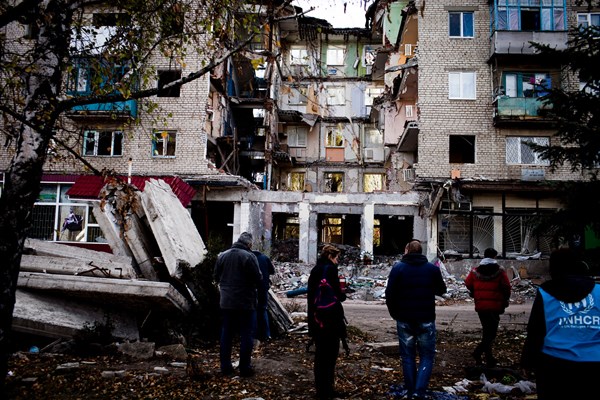 In his statement on Tuesday, Ivan Simonovic, the assistant U.N. secretary-general for human rights noted that efforts by Russia-backed separatist rebels to block "desperately needed" humanitarian aid from reaching people in conflict-ridden eastern Ukraine could amount to crimes against humanity. Mr. Simonovic criticized as a "great mistake" the move by rebels who control the eastern city of Luhansk to kick out U.N. and humanitarian aid agencies.

"I do think that currently the military warfare has been transformed into some sort of humanitarian war," Simonovic told reporters in Geneva after visiting rebel-held eastern Ukraine last week.

Russia-backed separatists have been fighting Ukrainian government troops in east of the country since April 2014, and at least 8,000 people have been killed in the conflict.

Simonovic said 90,000 UNICEF polio vaccines are now unlikely to reach children in the area where polio cases have turned up.
A lot of children don't have access to basic medicines, he said, pointing to a shortage of antiretroviral medicines needed by about 8,000 people in the Donetsk area.
According to UNICEF data, Ukraine has had one of the fastest growing HIV epidemics in the world.

Earlier German Chancellor Angela Merkel urged Russia to use "its not-inconsiderable influence on the separatists" to ensure access for humanitarian organizations as foreseen in a peace-deal struck in Minsk, Belarus, whose terms haven't been applied fully.

Merkel will meet the leaders of Russia, Ukraine and France in Paris on Friday to discuss the conflict in Ukraine, and Simonovic said he hoped that that so-called Normandy group meeting would make progress toward easing the humanitarian situation.