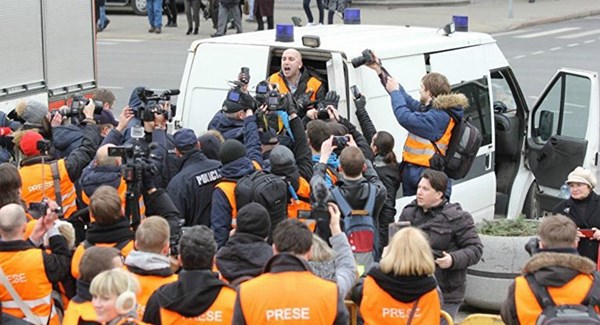 On the night of March 17th, pro-Russian blogger and journalist Graham Phillips, who was arrested during the events at the Freedom Monument, was deported to Russia. According to the Minister of Internal Affairs of Latvia, Rihards Kozlovskis, Phillips was also included on the "black list.”

The Minister stressed that Phillips is a citizen of the EU, so he is prohibited from entering Latvia for 3 years. Taking into account the fact that Phillips arrived in Latvia by car, he could not be deported by law enforcement to the United Kingdom. For that reason he was sent to Russia, which agreed to take him in.

Kozlovskis decided to include Phillips in the "black list" on the advice of the Security Police, making it appear to be an administrative decision and not a political one. Phillips was the only person detained for the events on March 16th in the center of Riga. He loudly shouted slogans during the laying of flowers at the Freedom Monument.

Phillips posted several videos of his deportation on the Internet. In one of them he claims that he was banished from Latvia for three years because the authorities did not like that he was asking questions of the participants of the procession of legionnaires. "I was filming an unofficial, pro-Nazi meeting in Latvia and the authorities did not like the way I showed it. They expelled me for three years," Phillips said.

Graham Phillips is a former freelance employee of the Russian state TV channels Russia Today (“RT”) and Star. He became famous for his journalistic work during the events of Euromaidan in Ukraine in late 2013 to early 2014 and for coverage of the armed conflict in eastern Ukraine.