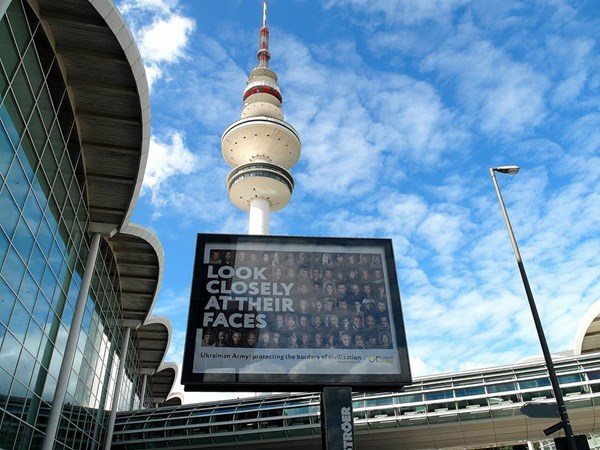 Yesterday, 7 July, before the meeting at the Hamburg G20 summit between the US President, Donald Trump and the Russian President, Vladimir Putin, a poster with portraits of Ukrainian soldiers, "fighting against Russian aggression" disappeared from a billboard, reports the press service of one of the sponsors of the project, the Ukrainian Crisis Media Center.

“The reason why our poster was removed is not known at this time. It is worth noting, however, that we were informed about its removal at the end of the long-awaited meeting of Presidents Trump and Putin,” said the author of the project and the co-founder Ukrainian Crisis Media Center, Gennadiy Kurochka.

The absence of the poster on the Billboard was also noticed by a journalist and photographer, Lisa Piesek, posting about it on the Facebook.

Details of the incident are being confirmed.

“This project is very important. Its purpose is to remind the leaders of the free world that Ukraine received security assurances in 1994 under the Budapest Memorandum, when it gave away the third largest nuclear arsenal in the world. And now Ukraine is courageously opposing the Russian aggression and defends the frontiers of civilization,” said Gennadiy Kurochka.

The first private meeting of Vladimir Putin and Donald Trump was held on July 7, during which they discussed a number of issues, including the war in the Donbass.