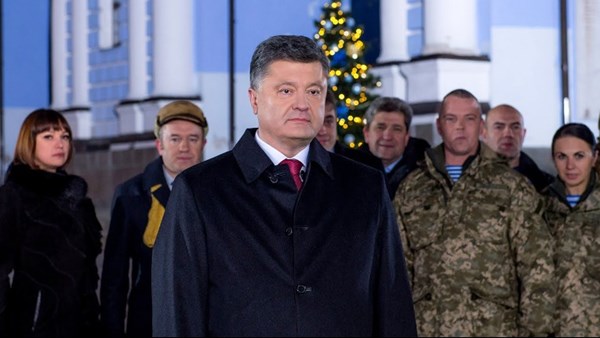 During his annual New Year’s address, Ukrainian President Petro Poroshenko acknowledged the country’s accomplishments in 2015, saying that Ukrainians have become "not only older, but also wiser and stronger."

While Poroshenko recognized the sacrifices of Ukrainian soldiers who are “not at the festive table, but in the cold winter trench… those who are now standing with guns, not wine glasses”, his address highlighted the path that Ukraine is taking towards integration with Europe.

“It is symbolic that on the eve of the holidays, we have reached several important agreements with the EU. Next year, the paper curtain between Ukraine and the European Union will fall down. Citizens of our state will have an opportunity to freely make business and tourist trips to Europe,” the President stated.

Poroshenko stressed that the country still has much work to do in in the coming year, especially when it comes to combating Ukraine’s widespread corruption, though the groundwork for overcoming this has already been laid. “Integration with Europe requires elimination of corruption. We have ensured all preconditions for this struggle. We have established absolutely new and politically independent anti-corruption bodies. People with new values started working there after passing the test. They came to work under the close supervision of civil society,” he said.

While the President stated that there is much work to be done in terms of European integration, he also reiterated that the situation in eastern Ukraine remains volatile, and the country must repel any attempts to further destabilize the region.

“If we prevent the full-scale offensive of Russia with joint efforts of our Armed Forces, volunteers, workers of defensive enterprises, diplomats and international partners, if we do not let the external enemy undermine our stability from inside with political strife, next year we will be able to say that the worst is behind,” Poroshenko concluded.