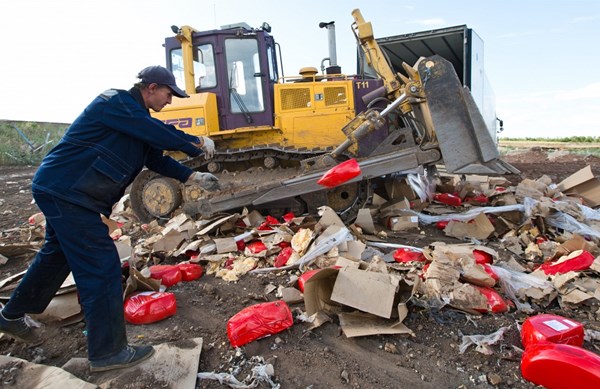 As reported by the Russian Federal Service for Veterinary And Phytosanitary Surveillance on Monday, over 700 tons of sanctioned food has been destroyed in Russia since early August when President Putin's decree on special economic measures came into effect.

According to the agency, as of September 27, over 676 tons of contraband food has been detained, including 318 tons of food of animal origin.
The first batch of products were destroyed on 6 August. Many politicians and public figures have criticized the President's initiative and suggested the food should be used as aid for those in need instead.
Russian grocery embargo was introduced in 2014 in response to Western sanctions in connection with the annexation of the Crimea and Russian role in the conflict in the east of Ukraine.
According to the analytical center of the Russian government, the embargo has led to a spike in prices and lower quality products.

Russia's Federal Agency for Consumer Rights (Rospotrebnadzor) is developing regulations stipulating criminal punishment for officials who attempt to eat sanctioned food products. The officials, who choose to eat sanctioned delicacies will face a fine of up to 120,000 rubles, compulsory work of up to 360 hours, correctional labor of up to one year or arrest for up to three months.