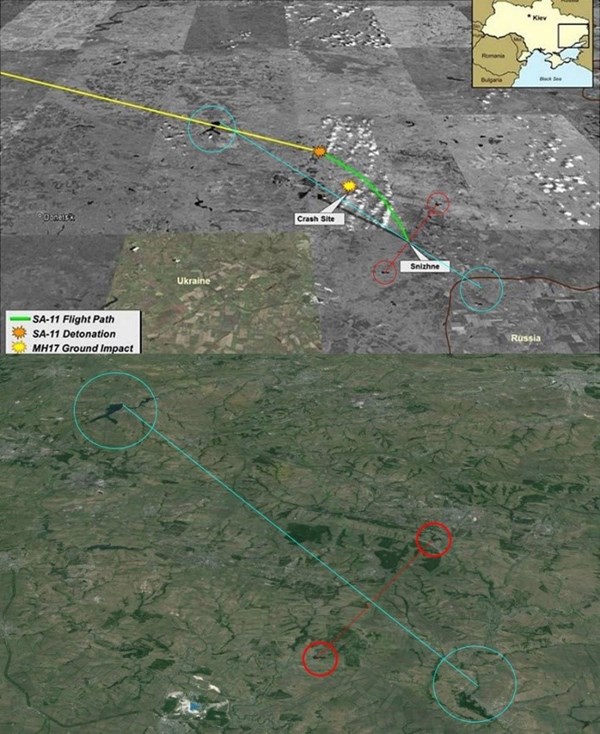 According to the report by Bellingcat.com, the origin of the russian Buk missile launcher that downed MH17 over east Ukraine last summer has been uncovered.
Having analysed a great number of photographs and videos shared online after the downing of Malaysian MH17 it was possible to confirm the location where each image was recorded and discover additional information that further evidenced when and where the Buk missile launcher was on July 17, 2014.
It was discovered that one particular Buk missile launcher seen in Russia in late June had features that matched those visible in the two photographs of the Buk missile launcher in Donetsk published by Paris Match. The Buk was identified as being part of a military convoy that travelled from Kursk to Millerovo, Russia, between June 23 and June 25.
A thorough investigation concluded that on July 17, 2014 a Buk missile launcher, originating from the 53rd Brigade near Kursk, Russia, travelled from Donetsk to Snizhne. It was then unloaded and drove under its own power to a field south of Snizhne, where at approximately 4:20 pm it launched a surface-to-air missile that hit Malaysia Airlines Flight 17 as it flew over Ukraine. On the morning of July 18, the Buk missile launcher was driven from Luhansk, Ukraine, across the border to Russia.

Alternative scenarios presented by the Russian Ministry of Defense and Almaz-Antey are at best deeply flawed, and at worst show a deliberate attempt to mislead using fabricated evidence.