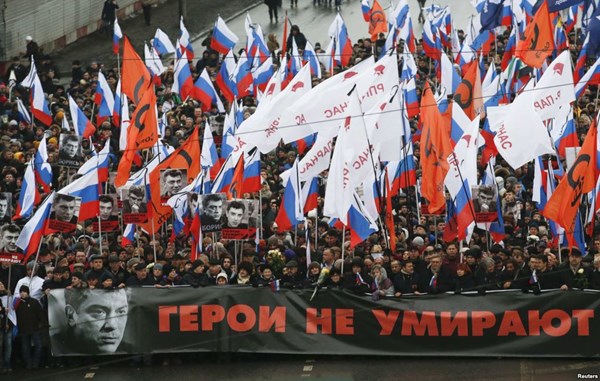 City authorities in St. Petersburg have agreed that the demonstration in remembrance of opposition politician Boris Nemtsov will be held on Mars Field.  “We received a call and were informed that the meeting, with the participation of 5,000 people, has been agreed to.  We are in the process of receiving the written confirmation,” Andrei Pivovarov, the Co-Chairman of the St. Petersburg Branch of the People’s Freedom Party (PARNAS), told Deutsche Welle on February 18th.

He added that the procession will start at the Gorkovskaya metro station and finish at Mars Field.  It will be held on the 27th of February, which is the one year anniversary of Nemtsov’s murder.  The event was organized by PARNAS, the Yabloko party, the Spring movement and the Democratic Choice party.

Another event called “March against the state terror” has not been approved by St. Petersburg authorities.  This was reported to Interfax by the coordinator of the coalition, Vsevolod Nelaev.  This event was organized by the Democratic Petersburg coalition and was due to take place on February 28th.  According to Nelaev, activists will still gather at the Gorkovskaya metro station and will continue onto Kazanskiy Cathedral, which will host the People's Assembly.

A larger march in scheduled to be held in Moscow on the anniversary of Nemstov's murder, in which an estimated 50,000 people will attend.