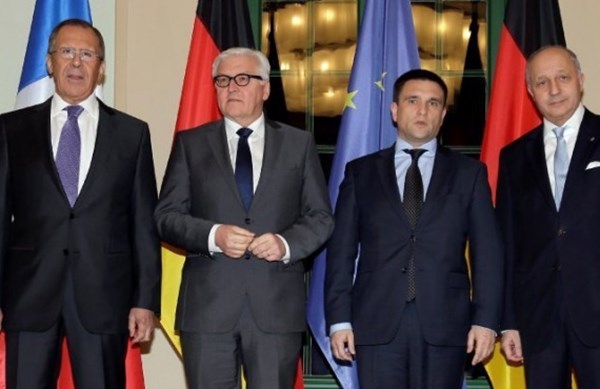 Pavlo Klimkin, who is the Minister of Foreign Affairs of Ukraine as well as a participant in the meeting of the Foreign Ministers of the ‘Normandy Four’, has admitted that after the meeting held on the 13th of February, “there was not a single concrete result.”  He said that this meeting was only a preparation for the next upcoming meeting.    Klimkin’s Russian counterpart, Sergei Lavrov, silently left the talks without providing journalists with comments.

A Kiev political science professor, Olexiy Haran, expected this result.  He stressed in an interview with Deutsche Welle that the Ministers of Foreign Affairs are generally characterless figures who can only carry out the policy that has been planned by those in higher positions.  "At these meetings, from such ministers, we can only expect the implementation of directives from the top, or preparation of solutions for their top political leaders,” Haran said.

Nevertheless, Haran believes that it is important that Klimkin spoke about the Russian annexation of Crimea at the ministerial meeting.  Klimkin has said that he would continue to do this in the future, even though the Normandy Format makes no provision for discussions relating to the situation in Crimea.  "Thus, Klimkin reminded the European partners that Russian aggression in the Donbas emerged due to the lack of adequate reaction from the West to Russia’s seizure of Crimea.  The purely symbolic sanctions imposed by the European Union (EU) only encouraged the further aggression of the Kremlin," Haran concluded.

The ineffectiveness of the current Normandy Format ministerial meeting was predetermined by a complex internal situation that had formed in each of the four countries.  This is the point of view of an expert of Ukrainian prism, Foreign Policy Council, Sergiy Gerasimchuk.  He expressed these thoughts in an interview with the Deutsche Welle.

He stated that Ukraine is going through another political crisis that threatens, at the very least, the reforms of the government.  According to Gerasimchuk, Germany and France are engaged in solving the problems of refugees, as well as searching for resolutions to the military conflict in Syria.  Russia however is attempting to prolong the implementation of any decision within the framework of the Minsk Agreements and negotiations of the Normandy format in the hopes of abolishing Western economic sanctions in the summer of this year.

The Minister of Foreign Affairs of Russia, Sergei Lavrov, showed this unwillingness to negotiate by adhering to the entire set of Kremlin propaganda clichés in Munich.  He also did not comment on the proof that Russian weapons were delivered to the Donbas, or the political repressions occurring in Crimea.   One of the leaders of the Verkhovna Rada Committee on Foreign Affairs, Volodymyr Ariev, gave his views on the situation.    "In the context of the events in the Middle East and the statements of Russian Prime Minister Medvedev about a Cold War between the West and Russia, we see that Moscow deliberately aggravates the international situation," Ariev said.