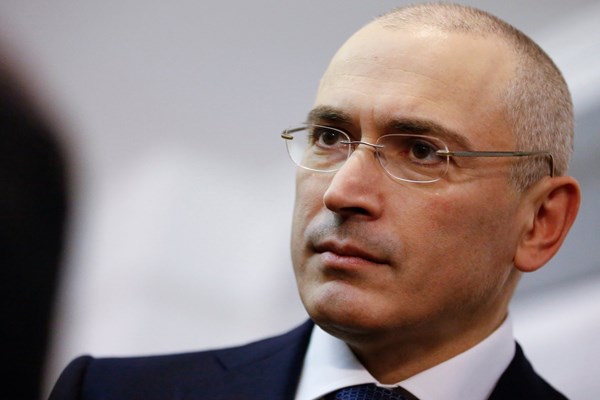 President Vladimir Putin will survive Western sanctions as well as falling oil prices, but the Kremlin chief has brought such stagnation that Russia could eventually collapse, the former tycoon, Mikhail Khodorkovsky said on Thursday.
Russia's richest man, who was arrested in 2003, after quarreling with Putin and released in 2013, told Reuters that Putin could indeed survive oil prices of $45 per barrel, but the longer he stays in power, the greater risks will be for Russia.
He said that Putin, who became Kremlin chief on the last day of 1999, had stunted Russia back to the stagnation which sapped the power of the Soviet Union in the 1970s and 1980s when the country was ruled by Leonid Brezhnev.
"Russia has plunged back into a situation similar to that of the end of the 1970s," Khodorkovsky said in his interview with Reuters in London. "We are in the final stages of a Brezhnev-like stagnation period. Putin is younger, so, unfortunately, this stagnation may last longer."

Khodorkovsky, who owned Russia's biggest oil company YUKOS, thought that the West would ease sanctions against Russia under the business pressure.
"If you ask whether Russia will survive in its current borders when Putin leaves office, then I would say that the chances of it surviving if he leaves in the next 5-8 years are better than if he leaves in the next 15 years, for example," Khodorkovsky said.
"I am talking about Russia`s survival in its current borders," he said.
Khodorkovsky said that in the short term, Russia's political and economic situation is not tense enough for a revolution as living standards have not fallen enough to cause a disturbance to the general population.
"Putin has a good chance of remaining in power for a long period," he said.
Putin is trying to use the crisis in Syria to make some steps towards rapprochement with the West. In connection with the situation in Ukraine, relations between the two sides has deteriorated so much that they were worse only in times of "cold war", Khodorkovsky said.

Putin wants to use the crisis in Syria to edge Russia towards a rapprochement with the West after a stand-off over Ukraine brought relations between the two sides to their lowest since the Cold War, Khodorkovsky said.
"Just at the time when the reserves will be running out, sanctions will be lifted against Russia," he said. But he added, "There is a fundamental problem which will hamper this rapprochement: ... authoritarian leaders commit mistakes without understanding that they are committing them."

Khodorkovsky evaded questions about whether he would ever run for the Russian presidency himself, saying he is interested in social and civil society activity.
"It is like asking me if I'm ready to fly to Mars. The likelihood of me being chosen to fly to Mars is very small," Khodorkovsky said.
Khodorkovsky, was convicted of tax evasion. He called this judgment ‘politically motivated’ and the charges ‘fabricated by his opponents’ who wanted to rip apart his company and punish him for his political ambitions.
He always denied the charges. YUKOS was crippled with massive back-tax claims and then its main Siberian oil production units were sold off by the state. Most of them were bought by state-owned companies.
He told Reuters he now mostly resides in London. "I cannot give you short-term forecasts about Russia, but if we are talking about the next ten years then we should expect revolutionary changes,” he said.