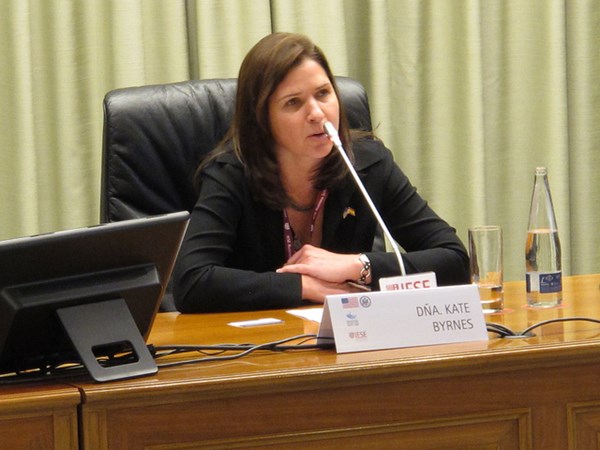 The U.S. Deputy Chief of Mission to the OSCE accused Russia and separatists of ceasefire violations.

The U.S. Deputy Chief of Mission, Kate Byrnes spoke at a meeting of the OSCE Permanent Council in Vienna and provided an overview on the deteriorating situation in eastern Ukraine. She noted that the U.S. is concernedly "noticing an increase in violence along the border" in the Donbas.

During the past weekend, the diplomat said that ceasefire violations had increased more than four times compared to the previous week. The presence and use of heavy weapons near the line of contact has resulted in the deaths of soldiers and civilians and undermines the implementation of the Minsk Agreements.

"Joint Russian-separatist forces continue to hamper the work of the SMM (Special Monitoring Mission) and threaten its observers," Kate Byrnes said. At the same time, she referred to the reports of the chief observer, Ambassador Apakan, who documented that "the vast majority" of incidents where the SMM has been denied access, were within the territories controlled by separatists.

The Deputy Chief reiterated that when the Special Monitoring Mission was created, all 57 OSCE participating states agreed that "the mission will have reliable and secure access to the entire territory of Ukraine."

"It's disappointing that the Russian Federation does not fulfill their obligations; it also creates a dangerous situation, because the lives of observers are being put in danger,” the diplomat said. “We call on the Russian Federation and the separatists who it supports to ensure free, unimpeded and secure access for the SMM to all the territory of Ukraine that is under their control, including the area along the Ukrainian-Russian border and in Crimea."

Kate Byrnes also urged both sides of the conflict to agree on the conditions for local elections, "which should be fully consistent with Ukrainian legislation and the OSCE standards."

"We are reiterating that Russia’s continuing aggression against Ukraine both in the Crimea and in eastern Ukraine is a violation of its obligations under the Budapest Memorandum, the Helsinki Final Act and the Charter of the United Nations, to refrain from the threat or use of force against the territorial integrity or political independence of Ukraine," Byrnes concluded.