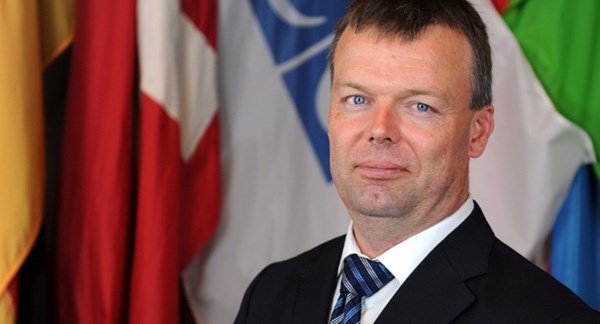 The Principal Deputy Chief Monitor of the OSCE Special Monitoring Mission to Ukraine, Alexander Hug, said information collected by the organization indicates that Russian troops have been directly involved in the war in eastern Ukraine since the conflict first erupted in the spring of 2014.

At the same time, speaking at a press conference in Odessa, Hug stressed the mission itself only reports on what it sees and hears, and refrains from drawing conclusions.

"From the beginning, we wrote in our reports about different types of weapons. It includes, among other things, electronic equipment, which interfered with the work of our drones. We wrote in our reports that observers recorded the presence of armed men with visible insignias of Russian troops on their uniforms. We also talked to prisoners who said that they were the soldiers of the Russian army. Also, we saw traces - not the vehicles themselves, but the traces of their movement across the border [from Russia to Ukraine]," Interfax-Ukraine quoted Hug as saying.

Despite the overwhelming evidence suggesting regular Russian troops and military equipment are actively involved in the war in the Donbas, the Kremlin continues to insist that Russian citizens fighting in eastern Ukraine are there strictly as “volunteers”. This is one of the main obstacles to the implementation of the Minsk Agreements, which call for the withdrawal of foreign armed groups, military equipment and mercenaries from the territory of Ukraine.