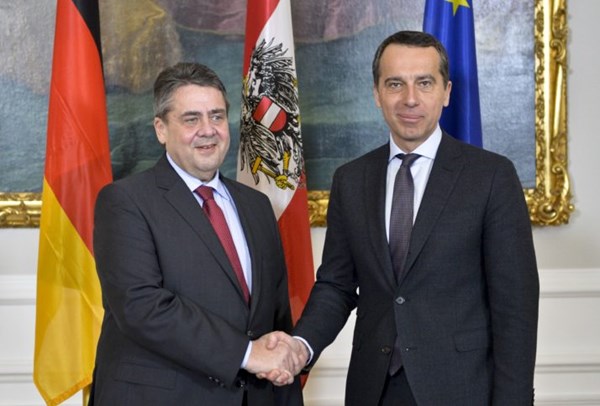 German Foreign Minister Sigmar Gabriel and Austrian Chancellor Christian Kern called for a correction of the bill approved by US senators to tighten anti-Russian sanctions in the energy sector.

They believe that these measures threaten the European companies participating in the development of Europe’s energy supply.

“Political sanctions should not be linked up to economic interest. To threaten companies in Germany, Austria and other European firms with fines in the US if they take part in or finance energy projects like Nord Stream 2 represents a new and negative dimension to US-European relations,” the joint report published by the German Foreign Ministry states.

The politicians specified that this impacts “the competitiveness of the energy industry and thousands of jobs,” and so they “support efforts by the US State Department to amend this document”.

“Europe’s energy is the business of Europe, not of the US,” Gabriel and Kern emphasized.

Furthermore, this bill makes it harder for the US president to single-handedly lift the sanctions. The document is now supposed to be reviewed by the House of Representatives of the US Congress, and if it is supported there too, it will be sent to President Donald Trump to be signed.

US State Secretary Rex Tillerson, commenting on the bill, called on Congress to give the president the opportunity to amend the sanctions in order to “meet the needs of what is always an evolving diplomatic situation”.

According to the agreement made in April 2017, the European partners of the Nord Stream 2 AG gas pipeline are to provide 50% of the total cost of Nord Stream, which is currently estimated at €9.5 billion.

On Thursday, deputy chair of Gazprom Aleksander Medvedev announced that Nord Stream 2 had received all the funds from European partners which were supposed to be given in 2017.

The Nord Stream 2 project proposes the construction of two gas pipelines with a total capacity of 55 billion cubic meters per year which will be placed at the bottom of the Baltic Sea up to Germany. The construction of the pipeline should start in 2018, and its launch is scheduled for the 2019.

At the end of 2015, then Ukrainian Prime Minister Arseniy Yatsenyuk assessed Ukraine’s annual losses due to the launch of Nord Stream 2 at $2 billion as a result of the decreased volume of transit through the Ukrainian gas transmission network.