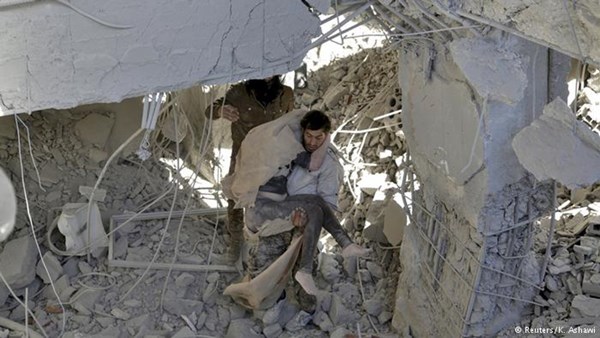 After meeting with one of the coordinators for the Syrian opposition, Rayad Farid Hijab, the French Minister of Foreign Affairs and International Development, Laurent Fabius, told reporters that Syria and Russia must halt military operations against civilians. According to the Minister they have discussed the absolute need to halt military actions which Russian and Syrian Government forces are taking against civilians. Fabius specified that the discussion was focused on the small Syrian town of Madaya.

The Minister of Foreign Affairs stressed that Syrian authorities must discontinue its siege on Madaya and cease all attacks on towns that are held by the enemies of Syrian President, Bashar Al-Assad, in advance of negotiations on the resolution of the crisis in Syria that will take place in Geneva. Fabius noted that it is unacceptable for Bashar Al-Assad to stay in power. Paris intends to apply to the UN Security Council in order to force Syria to halt attacks on civilians.

“We want to negotiate but these conditions must first be fulfilled,” Hijab stated after the meeting with François Hollande. "We can’t negotiate with Bashar Assad’s regime when foreign forces carry out airstrikes on the Syrian people," Hijab said. According to him, three schools were damaged, 35 children were killed and dozens were wounded as a result of airstrikes by Russian airplanes in Aleppo.

On the 11th of January, the Syrian Human Rights Monitoring Centre reported that 12 children were killed as a result of airstrikes on a school in the suburbs of Aleppo. Since November of 2015, France has actively participated in military action against the so-called Islamic State. Airstrikes on Islamic State positions were carried out from the Charles de Gaulle aircraft carrier. French airstrikes have intensified in recent months.