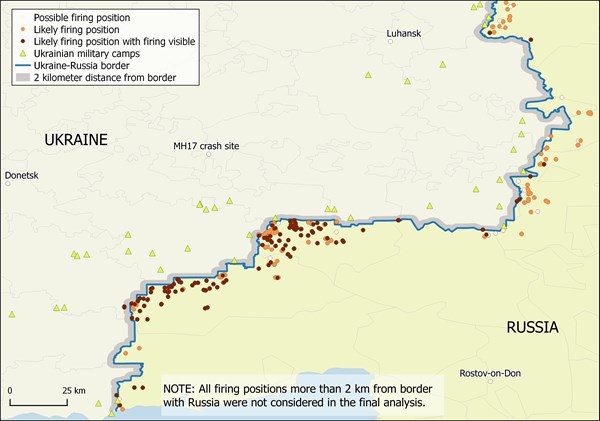 In the summer of 2014, Russia fired on the Ukrainian territories of Donetsk and Luhansk using artillery at least 149 times, according to the Bellingcat report that was published on Wednesday, December 21st. Analysts say that 130 sites in Russia were used as artillery positions.

According to Bellingcat, 408 targets in Ukraine happened to be within the range of the Russian artillery systems. 127 of them were at a distance of no more than three kilometers from the Russian-Ukrainian border, and the trajectory of the shelling of these targets crossed the border between the two states.

According to the authors of the report, "these figures represent a lower limit of the estimate of the true number of attacks." But based on the identification of the scale, frequency, and prevalence of the attacks, Bellingcat analysts regard them as "purely an act of military action of the Russian Federation against Ukraine."

In 2015 Bellingcat already published a study about the shelling of Ukrainian territory, but then it was possible to describe only a few cases.

In order to determine the areas of the shelling Bellingcat used satellite images, available on the public domain on the Internet. In particular, the authors used images of Digital Globe and Google Earth, which are dated to July-August, 2014. Those images show artillery batteries of towed guns, as well as traces of volleys of multiple launch rocket systems.

According to the authors of the report, in order to establish the facts of the shelling, a 22 kilometer wide border strip on the Ukrainian territory of the Donetsk and Luhansk regions was studied. The entire territory of the Rostov region, bordering Ukraine was studied as well.

Experts found 2254 possible objects of interest on the territory of Russia and Ukraine, with 1344 of them considered unrelated to the investigation. Among the remaining objects, they have identified 518 craters from artillery shells on Ukrainian territory, and 305 were considered to be potential firing positions on the Russian or Ukrainian territories. From the number of potential positions, they identified 279 as likely.

The trajectory of the shells was determined by experts using the common azimuth based on the sample of five craters at each shelling site. Based on these calculations, the analysts say that the trajectory of the shells crossed the Russian-Ukrainian border. In addition, Bellingcat provided satellite images of craters from shells and based on their configuration was able to make conclusions about the directions of shelling. The images show three to ten craters. In particular, the pictures show the terrain in the Donetsk region — north-east of Dibrivka and west of Marynivka. The configuration of craters, according to the analysts, indicates that the artillery shelling of these areas was carried out from the territory of the Rostov region.