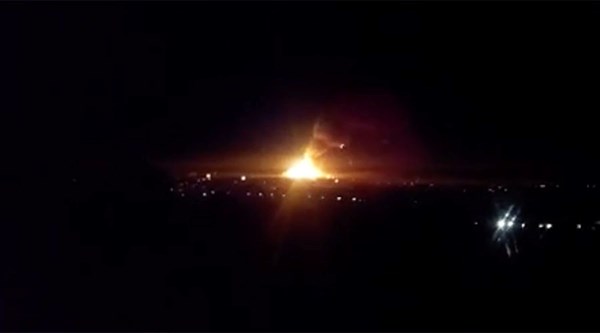 At least two people have been killed in the Ukrainian town of Svatove after a series of blasts at a ammunition depot.

Local media has said the Ukrainian security forces were investigating and claimed it could be a terrorist act.

The town lies in a government-controlled part of the Luhansk region. In addition to the two casualties, four civilians and four servicemen were wounded.

According to Ukraine's Defence Ministry statement, the fire was started by "the release of a flare that fell onto the territory from outside the base"

It did not say who it suspected was behind the alleged attack.

Nighttime video footage showed huge clouds of smoke billowing up from the depot, which contained 3,500 tonnes of ammunition. Occasional explosions shot fireballs into the sky.

The incident comes as a lull in violence on the front lines and the withdrawal of weapons by both sides raise hopes for a fragile peace process aimed at ending a conflict that has killed over 8,000 since April 2014.