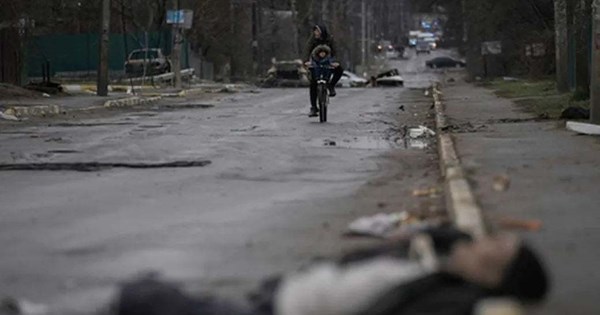 The Federal Intelligence Service of Germany (BND) allegedly intercepted radio communications of the Russian military, which contain new information about the massacre in the town of Bucha near Kyiv, reports Der Spiegel.

In radio messages, the Russians discussed the killings of civilians in Bucha. Some radio conversations can be correlated with the specific dead bodies in the photos from Bucha.

In particular, the German intelligence service has radio messages, the content of which correlates with the locations of the dead bodies  along the main street of Bucha.

In one of them, a Russian soldier claimed that he and his comrades had shot a man on a bicycle. The photo of the murdered man with a bicycle, which was published in the media around the world, has become one of the most famous testimonies of the atrocities in Bucha. In another conversation, a man, according to Der Spiegel, says that Ukrainian soldiers are first interrogated and then shot.

According to Der Spiegel, these materials lead to a conclusion that the mercenaries of the Russian private military company the Wagner Group played a decisive role in the atrocities in Bucha. These mercenaries demonstrated a special degree of cruelty during their participation in the war in Syria.

The newspaper emphasizes that the conversations intercepted by the BND indicate that the massacres in Bucha were neither accidental actions nor the actions of individual out-of-control soldiers.

The findings are much more likely to indicate that the killing of civilians has become part of the normal modus operandi of the Russian military, and perhaps part of its strategy to spread fear and terror among the civilian population and suppress resistance. Der Spiegel writes that in the intercepted conversations the Russian soldiers soldiers talk very casually about these atrocities.

According to the  newspaper, on April 6, the German intelligence informed the relevant parliamentary authorities in Berlin about this. In addition, on the same day, an examination of other audio recordings was carried out. It is difficult to determine their locations, but they suggest that similar cases happened in other places.