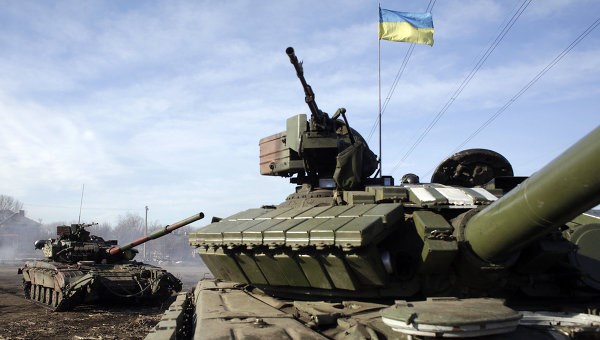 Over the last week, reports from the battlefield in eastern Ukraine have been overshadowed by news of Nadiya Savchenko. Nevertheless, the conflict remains very much active, especially in the strategically important town of Yasynuvata, where the Donetsk-Horlivka and Donetsk-Konstantinovkа junction is located, as Chetvertaya Vlast reported.

Reports suggest that Ukrainian forces have advanced towards the Yasynuvata and even managed to take control of the Donetsk-Horlivka route as well as a checkpoint of the so-called DPR outside of the town, though pro-Russian separatists deny these territorial gains.

Reports about a battle near Yasynuvata first appeared on March 8th.

"Ukrainian forces are holed up near the Yasynuvata transport junction" reported the soldiers. “We didn’t plan it but it just happened that when returning fire we advanced and took control of an area within artillery range of the Yasynuvata junction."

With Ukrainian control of the Donetsk-Horlivka route, separatist movement towards Debaltsevo is almost entirely blocked. The situation remains fluid, and though the road itself is not under Ukrainian control, it is inaccessible.

As reported by volunteers from the charitable group "Come Alive" on their Facebook page, the distance between Ukrainian forces and members of the so-called Donetsk People’s Republic has shrunk to a mere 500 meters.

At first, representatives of the so-called DPR tried to deny the gains made by the Ukrainian forces, though they later confirmed that the Ukrainian military managed to cut off Horlivka from Donetsk.

On March 8th, former field commander of the so-called DPR, Igor Bezler, confirmed that Ukrainian forces had gained control of the route. He also stated that separatists provoked the battle, and that they sustained heavy losses.

“Perhaps, with the commemoration of the recently Anniversary of the Great Debaltsevo Battle, ‘the brilliant commander’ Zakhar [Alexander Zakharchenko, leader of the so-called DPR] decided to conduct a new brilliant operation ‘a la Marinka’. The previous day, almost all military subdivisions which were subordinate to him directly were brought to the  Yasinovataya checkpoint… Having scant intelligence information, the fighters of this integrated unit sustained heavy losses and returned to their  initial position.”

“Today, the Ukrainian forces  have blocked the movement of the Yasynuvata-Horlivka route due to increasing attacks. The movement across the roadblock [located along the route near Yasynuvata] is temporarily halted,” spokesman for the so-called DPR, Eduard Basurin, stated.

Over the last several days, separatists made several unsuccessful attempts to dislodge the Ukrainian forces from the area. Separatist movement has effectively been blocked, and now the only possible way to get to Horlivka from Donetsk is to take a detour through Makiivka.

On March 10th, the group “Reports from Novorossia” confirmed on social media that more than 30 separatist were killed from March 5th to March 10th.

“Over these days, 30 (according to other sources 32) 200s [killed] on our side were identified and buried. Now I’m in tank division, but I will not tell which one. So, Ukries [Ukrainians] are shelling Yasynuvata road. Now there is no direct way from Horlivka to Donetsk. There is a meat grinder there near Yasynuvata . A lot of the 200s [killed], a great deal of the 300s [wounded],” a separatist member from that group posted on social media.

A reporter for the so-called DPR, Marina Kharkova, confirmed the heavy losses of the separatists.

“After heavy fights for Yasynuvata, just within one day 20 people with shrapnel wounds, mine-blast traumas and bullet wounds were taken to one of the Donetsk hospitals.  Six of them are being treated for сhest, spinal cord injuries and polytraumas. The enemy failed to entrench its presence. They were met by strong and effective actions of our soldiers,” she wrote.

The military success of the Ukrainian Armed Forces was also confirmed by a Russian military observer, Boris Rogozhin, also known as Colonelcassad.

“I would like to note that the problem of the Yasynuvata transport connection is to some extent the result of unsuccessful attempts over the past year to break through curve Peski-Avdiivka curve, when in spite of the efforts undertaken and heavy losses these two villages were not seized,” he wrote.

The confrontations near Yasynuvata are still continuing. Separatists are trying to dislodge the Ukrainian soldiers from their newly won positions.

Locals have reported on social media that armored vehicles and trucks carrying personnel are moving from Makiivka towards Yasynuvata.