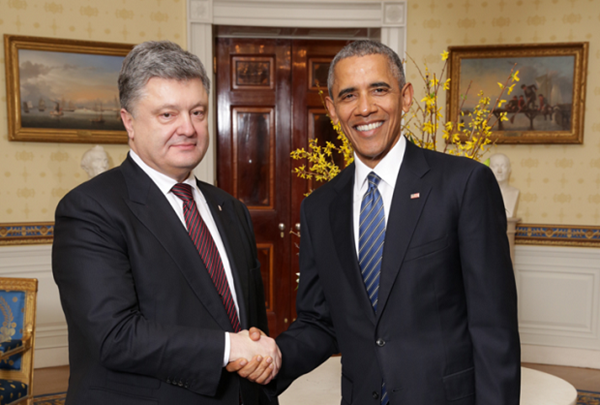 Barack Obama has confirmed his readiness to provide Kiev with a tranche of one billion dollars after the formation of the new government in Ukraine. According to the press service of the Ukrainian President, Obama announced this at a meeting with Petro Poroshenko during the Nuclear Security Summit in Washington.

"Special attention was paid to the need to form a reform-oriented coalition and government in Ukraine as fast as possible. President Obama has confirmed his readiness to provide the third tranche of the loan guarantee worth one billion US dollars at the end of the process of formation of a government in Ukraine," the statement read.

Obama and Poroshenko also coordinated efforts for the full implementation of the Minsk agreements, and discussed the development of a strategic partnership between Ukraine and the US.

Prior to the summit, Poroshenko met with US Vice President Joe Biden and Secretary of State John Kerry. Biden assured Poroshenko that the formation of the new government of Ukraine will open the path for Kiev to obtain new loan guarantees from the US.

Biden also announced the US decision to allocate an additional 335 million dollars to reform the security sector in Ukraine, in particular the Armed Forces, the National Guard and the State Border Service. Poroshenko, in turn, noted the priority for the Ukrainian government to combat corruption and create an effective anti-corruption system.

In January, Ukrainian media reported that the United States agreed to give Ukraine credit guarantees worth one billion dollars only if Prosecutor General Viktor Shokin resigned. In mid-February, Shokin wrote a letter of resignation. On February 19th Shokin's resignation was introduced in the Parliament. He sent a letter to the Verkhovna Rada requesting that MPs consider the issue in his absence. On March 29th, the Verkhovna Rada voted in favor of Shokin's resignation.