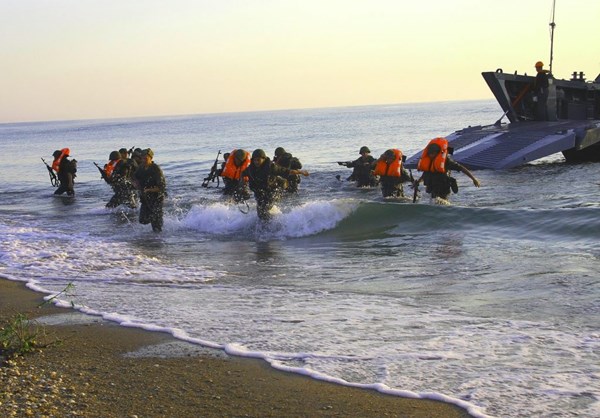 Russian servicemen will train to block the Kerch Strait and gas condensate field in the annexed Crimea, the Russian Ministry of Defense press service reported on Wednesday, August 31.

“Formations of various attack forces from the Black Sea Fleet and the Caspian Flotilla will hold a series of trainings in the waters of the sea, aiming to defeat a hypothetical enemy and suppress an attempt to lift a blockade of the Kerch Strait and one of the gas condensate fields, and will also train to free a border guard ship seized by hypothetical terrorists,” the statement reads.

It is also reported that organizational training is being carried out in subdivisions, platoons and territorial defense units in the framework of mobilization exercises and military trainings with soldiers on reserve duty.

“Readiness of a number of industrial enterprises for military tasks, such as supply and repair of weapons and military equipment will be checked," the Russian Defense Ministry noted.

The Russian Armed Forces military drill began on August 25 and will last until August 31, Minister of Defense Sergey Shoygu stated. Among the declared objectives is an assessment of the army’s ability to quickly build up combat readiness in the southwest direction.

Russian military transport aircraft have moved special task units from northwest Russia to the landfills of the Southern Military district. There were 20 Il-76 aircrafts involved in the combat readiness tests.

On August 26, there were 15 combat ships from the Black Sea Fleet and 10 ships from the Caspian Flotilla that left the port to test their combat readiness.

Recently, combat readiness checks such as these have become more frequent in the Russian army.