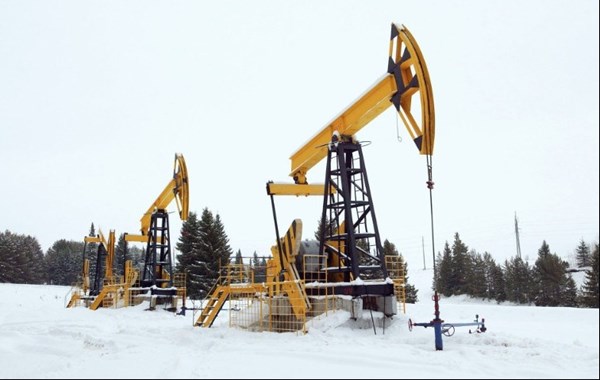 With the Russian economy continuing to plummet as a result of western sanctions and low oil prices, the Kremlin seems to be sticking to its reliance on hydrocarbon exports, as oil revenues still account for 44% of the federal budget. For the 25 years since the collapse of the Soviet Union, the Russian government has done little to relieve the economy from its dependence on oil and gas, and with the value of the ruble at a record low, many experts worry that it may be too late to diversify Russia’s crippled economy.

Interfax recently reported that Russia’s oil exports increased by 10.6% in 2015 with output reaching just over 10.7 million barrels per day, a post-Soviet record. These figures, however, are misleading, as the price of oil currently stands at just over $37 per barrel, almost $100 per barrel less that it was at the time of Russia’s annexation of the Crimea in early 2014, and the country’s 2016 budget was calculated on the basis of an oil price of $50 per barrel.

Not only are hydrocarbons Russia’s main export, they are also an aggressive foreign policy tool of the Kremlin. With the world’s largest supply of natural gas and a knowledge of Europe’s reliance on these natural resources, Russia began its attempt to revise the post-Soviet world order by seizing the Crimea in early 2014. Following the ease with which Russian Special Forces were able to occupy the peninsula, Putin sought to continue Russia’s territorial expansion by annexing the Donbas region as well. The latter attempt has led to a bitter and violent war in eastern Ukraine, in which the Ukrainian Armed Forces have been able to keep Russian encroachment at bay. This aggression has led many western countries to impose wide-ranging economic sanctions against Russia.

Moreover, Moscow has failed to predict the consequences of the development of technologies of exploration, production, and transportation of natural gas. The “shale revolution” in the US has led to a deterioration of Europe’s reliance on Russian natural gas. The most significant market to have dwindled was Ukraine; in the two years of turmoil in the country, Ukrainian imports of natural gas from Russia have fallen from 60% to 30%.

Russia is not part of the Organization of Petroleum Exporting Countries (OPEC), which is a key player in the global market and defines the level of oil prices. Despite the low oil prices, Russia exported a record 220.267 million tons of oil in 2015 in order to prevent a sharp drop in revenue.

Energy consultant Mikhail Krutikhin explained in a radio interview that “all states, including OPEC countries, have concentrated on increasing their output and turning out as much oil as possible not to lose their market niches, not taking note that they are driving prices down… it appears that Russia is also following this path.”

Russia has certain financial reserves to help delay the collapse of its oil-and-gas-dependent economy, but after almost two years of recession, these reserves are quickly dwindling. The Kremlin is currently trimming government spending across the board, from the Roscosmos space agency to health care, and further cuts are almost inevitable. The wars in Syria and Ukraine are extra costs, and the announced increase in military spending is unlikely to be reversed.

While commenting on the country’s continued reliance on hydrocarbon exports, Russian Prime Minister Dmitrty Medvedev recently stated on Russian television that “this goes to say that our budget revenue structure is changing for the better,” and President Vladimir Putin assured the world at his annual end-of-the-year press conference last month that the country is prepared for any economic situation, despite the volatility in oil prices.