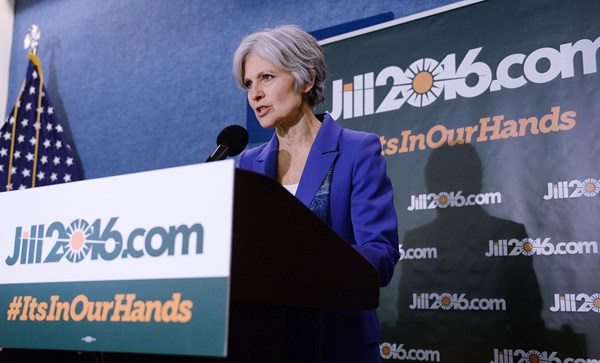 As the two main US political parties have officially nominated their candidates for the presidential elections in November, some embittered voters have thrown their support behind third party candidates, such as the Green Party’s Dr. Jill Stein. Disappointed with Bernie Sanders’ withdrawal from the Democratic race and subsequent endorsement of Hillary Clinton, many of Sanders’ supporters have found a number of similarities between their candidate of choice and Jill Stein, especially when it comes to domestic policy issues (demands for a $15/hour minimum wage, universal health care, promotion of human rights, etc.).

However, while Sanders’ stance on Russia and Ukraine is in line with US President Barack Obama’s, supporting a free and democratic Ukraine and bolstering NATO’s presence in Eastern Europe to deter Russian aggression, Jill Stein has taken a much different approach that is more in tune with Republican nominee Donald Trump’s.

Last year, during a phone interview with OnTheIssues.org, Jill Stein said, “We should encourage Ukraine to be neutral; we helped foment a coup against a democratically-elected government, [resulting in a government] where ultra-nationalists and ex-Nazis came to power.”

“So let's not be single-issue--instead of fomenting a hostile Ukraine we should be leading the way in establishing a neutral Ukraine that would allow Russia to not feel under attack,” Stein added.

The Green party candidate went on to accuse US Assistant Secretary of State for European Affairs, Victoria Nuland, and others in the Obama administration for inciting the overthrow of former Ukrainian President Viktor Yanukovych.

“The hostile faceoff with Russia causes that and is entirely misplaced--led by war hawks in Obama administration--especially Victoria Nuland, who cheered on an overthrow in Ukraine,” Stein stated.

Replying to the question of what the US should do about Russia, Stein answered, “I think this is an issue where something does need to be said--but it's important to understand where they are coming from. The United States, under Bush 1, had an agreement when Germany joined NATO; Russia agreed with the understanding that NATO would not move one inch to the east. Since then NATO has pursued a policy of basically encircling Russia, including the threat of nukes and drones and so on.”

While a Clout Research poll on July 27th showed that only 3% of respondents would vote for Jill Stein, the majority of these votes would otherwise go to Hillary Clinton, who has repeatedly spoken of the need to deter Russian aggression and support a democratic and free Ukraine.

Donald Trump, in contrast, recently made headlines when he stated that, if elected president, the US wouldn’t necessarily come to the aid of NATO allies in the event of a Russian invasion. In August of last year, Trump said he “wouldn’t care” if Ukraine joined NATO, and when he travelled there in September, he told Ukrainians that their war is “really a problem that affects Europe a lot more than it affects us.”

According to the Clout Research poll, Clinton is currently leading Trump by 3 percentage points. The elections will be held on November 8th.