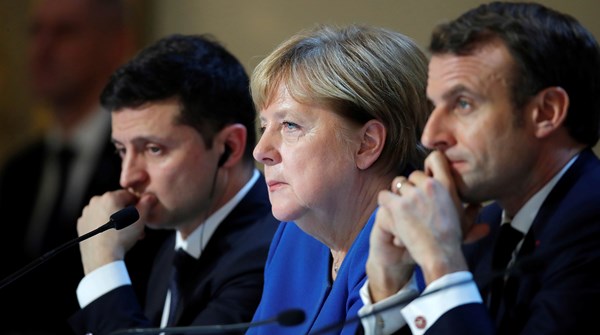 Leaders of the "Normandy Four" countries will soon hold talks on Donbas without the participation of Russian President Vladimir Putin, reports Dzerkalo Tyzhnia, citing a source in diplomatic circles.

The interlocutor of the newspaper claims that the conversation of the Ukrainian President, Volodymyr Zelensky, French President Emmanuel Macron and German Chancellor Angela Merkel will take place this week. The leaders of the countries will discuss the escalation of the conflict in the Donbas and coordinate their positions.

It is noted that the talks were to take place immediately after the video conference of Macron, Merkel and Putin, but they decided to postpone them because there were difficulties with agreeing on the time for the conversation.

Another source also confirmed that the conversation is being prepared. According to him, there is no clarity about the date and time of the talks, although such a conversation between the three leaders was planned a few weeks ago. That is, before the escalation of the situation in eastern Ukraine.

"The escalation of hostilities in the East increases the chances that it [the conversation] will take place this week," the interlocutor said.

On March 30, the French President, the German Chancellor and the President of the Russian Federation held a video conference during which they discussed the situation in eastern Ukraine.