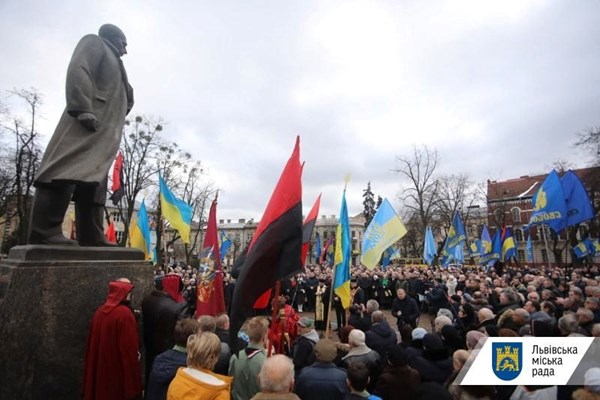 Ukraine categorically condemns all forms of anti-Semitism and pays homage to the victims of the Holocaust on a state level. It also does not intend to forego paying respect to the people who fought for Ukraine’s independence, whose names have been tarnished by Soviet propaganda, the Ukrainian Foreign Ministry said in a statement.

The Israeli ambassador recently accused Ukraine of glorifying Stepan Bandera and Andriy Melnyk, two leaders of the Organization of Ukrainian Nationalists (OUN), which had an anti-Semitic component to its views.

“Ukraine decisively condemns all forms of intolerance and anti-Semitism, and the organs of government on all levels make an effort to combat their manifestations. This has also been recognized by influential international and non-governmental organizations, as well as the Israeli Ministry of Diaspora Affairs. Such an appraisal coincides with those given by Ukraine’s Jewish community and the national non-governmental advocacy organizations,” the Ukrainian Foreign Ministry said in a statement on Tuesday, January 14.

The department emphasized that preserving the historical memory of the Holocaust tragedy will remain a part of Ukraine’s state policy, as well as the “restoration of historical justice regarding the people who fought for the Independence of our state and whose memory the Soviet Union’s propaganda machine smeared in its own interests”.

“Civilized nations should proceed from the principle of honoring all the dead, and the discussion in this area should proceed on the level of historians and experts, and not politicians,” the ministry continued.

On January 1 in Kyiv, Lviv and other Ukrainian cities there were traditional torchlight processions on the 111th birthday of OUN leader Stepan Bandera. Polish Ambassador Bartosz Cichocki and Israeli Ambassador Joel Lion made a joint statement condemning the “glorification” of OUN leaders Stepan Bandera and Andriy Melnyk, whom they alleged were complicit in the killing of Jews by the Nazis during World War II.