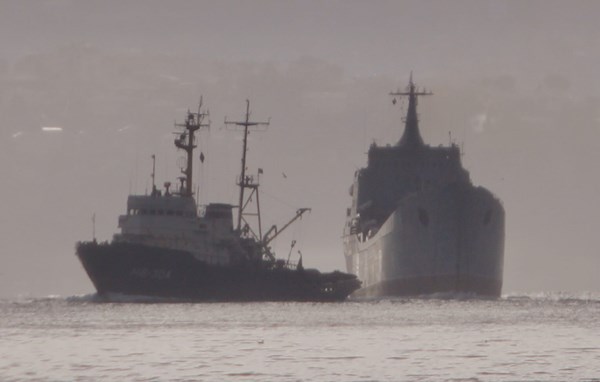 Russia's large landing ship Orsk has suffered serious damage off the Syrian coast and is only able to move with the help of a tugboat, reports the Russian news outlet Avia.pro.

The publication notes that, at the moment, it is not clear where exactly the incident could have happened - in the Mediterranean Sea off the Syrian coast or when the ship was passing through the Bosphorus.

The publication writes that the Russian Navy has not yet commented on the information about the damage at Orsk, and notes that there are a variety of versions on social networks as to why the ship is being towed. Some social media users even believe that this was caused by sabotage on board the ship.

According to the publication, the probable version of the incident is a technical malfunction of Orsk’s power plant.

In mid-December, the ship reportedly delivered vehicles, weapons and ammunition to Syria.

This is not the only case when a Russian Navy ship got damaged. Last April, a large landing ship of the Russian Navy Caesar Kunikov had to be towed to the base in Crimea. The ship had problems with its steering system.

The problem was discovered as the ship was passing Cape Khersones.

Caesar Kunikov has repeatedly made long voyages to the Mediterranean Sea, visiting the Syrian port of Tartus.