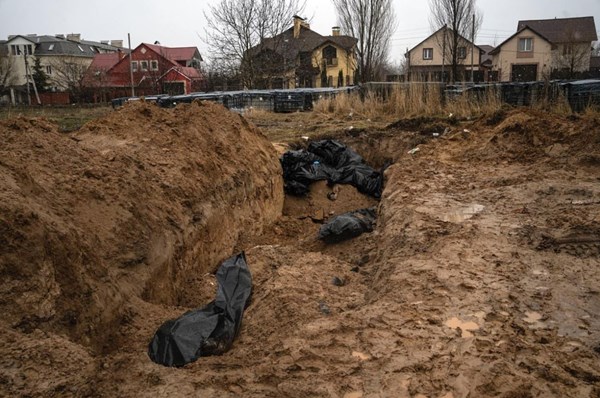 The United Nations human rights chief, Michelle Bachelet, announced Thursday that the bodies of more than 1,000 civilians have been found in the areas north of the Ukrainian capital of Kyiv that were occupied by Russian forces. The numbers include several hundred civilians who were summarily executed.

“The figures will continue to increase,” Ms. Bachelet told a special session of the United Nations Human Rights Council in Geneva.

The UN investigation has focused on reports of abuses in Bucha, Irpin and other suburbs of Kyiv.

As Russian forces withdrew from the Kyiv region at the end of March, mass graves were uncovered in Bucha and other towns in the region. Video evidence showed the Russian retreat left at least 20 bodies lining a single street. Some victims in the video had their hands tied behinds their backs.

Last week, Amnesty International announced it has evidence of war crimes committed by Russian forces in the Kyiv region during the invasion of Ukraine.

As Amnesty International’s Secretary General Agnès Callamard said in a statement, “We have met families whose loved ones were killed in horrific attacks, and whose lives have changed forever because of the Russian invasion. We support their demands for justice, and call on the Ukrainian authorities, the International Criminal Court and others to ensure evidence is preserved that could support future war crime prosecutions. It is vital that all those responsible, including up the chain of command, are brought to justice."

Russia did not attend the United Nations Human Rights Council meeting, as it withdrew from the council shortly after the UN General Assembly voted last month to suspend its membership.