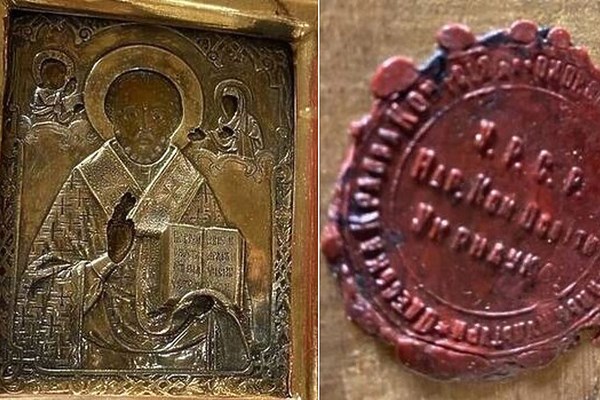 The cost of the 300-year-old gilded icon from Luhansk, which the co-chairman of the Presidency of Bosnia and Herzegovina Milorad Dodik gave to Russian Foreign Minister Sergey Lavrov, can be as mach as 12.5 million euros.

According to Bosnian TV channel BN TV, the icon was kept in the bank Bank of Srpska, which went bankrupt and was taken over by UKIO.

According to sources close to Dodik's cabinet, the politician believed that, presenting this gift, he would only return to Russia what previously belonged to it, and thus further strengthen the ties with this country.

According to the sources, this gift to the Russian Foreign Minister was not allowed by the government protocol. After the scandal, Lavrov returned the icon to the Bosnian Embassy in Moscow.

On December 14, Dodik presented Lavrov with a 300-year-old icon, which was allegedly taken out of Luhansk. As local media wrote the icon had an official seal on its back. The seal indicated that the icon was the property of the Ukrainian USSR. The Ukrainian Ministry of Culture and Information Policy reported that the seal on the icon shows that it is the property of Ukraine. This is the seal of the Odessa Regional Commission for the Protection of Monuments of Material Culture and Nature, which was created in 1926 at the Odessa Historical and Archaeological Museum.

On December 18, the Prosecutor's Office of Bosnia and Herzegovina opened an investigation into why the icon was presented to Lavrov.

On December 25, the icon presented to Russian Foreign Minister Sergey Lavrov was returned to Bosnia and Herzegovina.

According to media reports, the Ukrainian icon was taken from the Donbas through Russia and Serbia.

Earlier, the Office of the Serbian Member of the Presidency of Bosnia and Herzegovina Milorad Dodik informed the Embassy of Ukraine in Bosnia and Herzegovina that the icon of St. Nicholas, which the politician presented to the Head of the Russian Foreign Ministry Sergey Lavrov, allegedly "was in the possession of a family from the Republika Srpska" and is a "family icon."

On January 5, Dodik announced that he would return the icon to those from whom he received it.

On January 6, Ukrainian Foreign Minister Dmytro Kuleba said that "Mr. Dodik continues to lie, surpassing in his lies even his older friends." Kyiv continues to demand that the icon be returned to Ukraine.