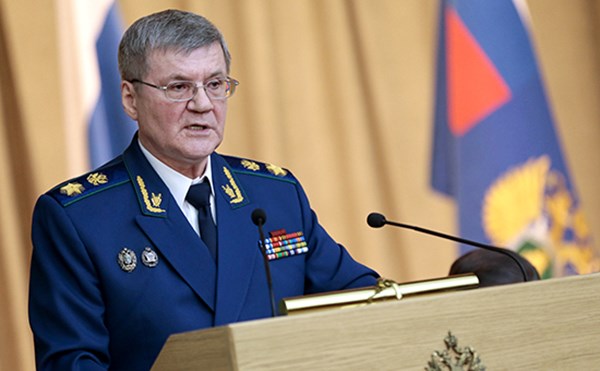 There is a need for international mechanisms which will prevent foreign states from arresting Russian citizens “with special status”, Russian Prosecutor General Yury Chaika believes, as reported by RIA Novosti.

He made a statement to this effect after visiting the Interpol headquarters in Lyon in connection with the charges brought against the Russian senator Suleyman Kerimov by the French Ministry of Justice.
“A practice which is not quite correct is emerging, when people with special status can be arrested so easily, even on charges of a serious crime,” the Prosecutor General observed.

According to him, it is “wrong”. “There should be certain mechanisms, restraining factors, because he represents the interests of a large group of the population, he is a senator, an elected individual,” Chaika added.

He also pointed out that there is an international mechanism which makes it possible to request criminal case materials “if a Russian citizen commits a crime in another country’s territory”. This can be done in order to “summon this person, if he has committed a crime, even in his own country, according to our legislation”.

The senator from Dagestan was arrested in the Nice airport on November 20. On November 23 he was charged with money laundering and tax evasion.

The French police believe that four villas in Antibes (Hier, Medy Roc, Lexa and Fiorella) situated near to each other were acquired by Suleyman Kerimov through a front – Alexander Studhalter, who owns this property according to the documents.

Kerimov denied that the villas belong to him through his representative, and Studhalter, in an interview with RBC, called the senator his “old friend and business partner”, unjustly accused by the French authorities.

Legal assistance in the acquisition of the villas was provided by jurist Stefan Chiaverini, whom the police believe to be “a specialist in creating offshore schemes”.

Earlier, Nice Prosecutor Jean-Michel Pretre, who represents the interests of the French Justice Ministry in the case, gave details on the alleged tax evasion scheme.

The official amount of the deal in the sale of the valuable property, for which taxes were paid, was several times lower than the actual acquired sum, the French authorities believe. The undeclared portion was transferred in cash, which, according to Pretr, was surreptitiously brought into France in “suitcases”. Charges of tax evasion have been brought against 12 people, including Kerimov.