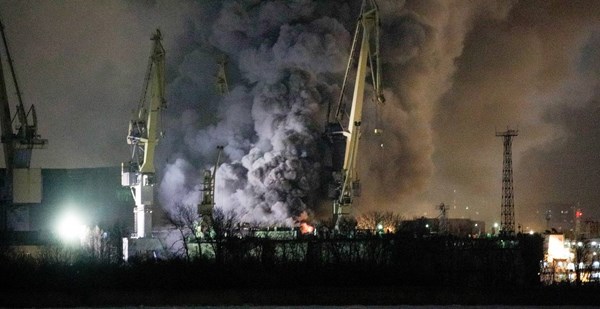 The fire on the corvette Provorny which was being built at the Severnaya Verf (Northern Shipyard) in Saint Petersburg had been extinguished, reported the news agency RBC, citing Severnaya Verf ‘s press service.

“The superstructure of the corvette was damaged as a result of the fire. The total area of the fire was 400 square meters,” said the press service of the shipyard adding that no one was injured.

" The superstructure and the upper deck of the corvette are being sprayed with water to eliminate possible smoldering. In parallel, water is being pumped out," the press service reported.

The press service noted that a commission of specialists from the United Shipbuilding Corporation and Severnaya Verf will be formed to establish the cause of the fire and assess the damage.

The North-West Transport Prosecutor's Office, which heads the investigation into the incident, said that, according to preliminary data, three people were injured. Earlier, the Russian Ministry of Emergency Situations reported two injured firefighters. They were taken to the hospital with burns. The press service of the City Ambulance Station of Saint Petersburg also told RBC that there were three victims.

The fire at the Severnaya Verf occurred on the evening of December 17. The press service of the United Shipbuilding Corporation reported that the fire began on the project 20385 corvette. The project includes the vessels Gremyashchiy and Provorny. By 21:26 Moscow time, the fire covered 800 square meters and more than 160 people were engaged in extinguishing it. The Unified Duty Dispatch Service explained to Interfax that "this is the area of almost the entire corvette". By 23:00 , the crews managed to contain the fire.

According to the United Shipbuilding Corporation, the warships of project 20385 are planned to be equipped with Kalibr cruise missiles. At the same time, the commander of one of the vessels - Gremyashchiy - Roman Dovgailov claimed that they could be equipped with Zircon hypersonic missiles in the future.

Construction of the Provorny began in 2013. It was expected to be delivered to the Russian Navy at the end of 2022.

According to preliminary information, the fire could have happened due to safety rules violation. The Russian Investigative Committee opened a criminal investigation “into violation of safety rules during construction”, which can lead to a three-year sentence. The prosecutor's office also began an investigation into the incident.