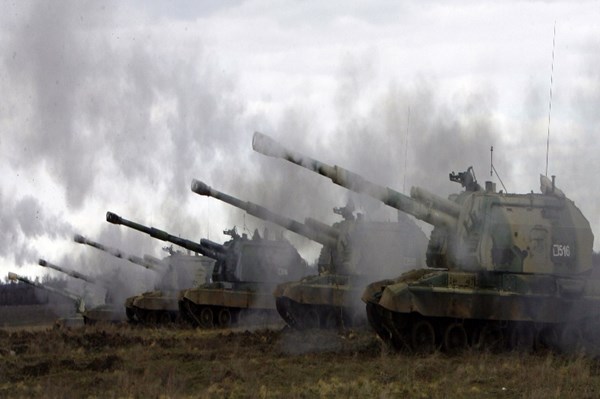 Russian State Duma Speaker Vyacheslav Volodin threatened the Weste with decisive retaliatory measures if it supplies Ukraine with offensive weapons, which, in his opinion, will certainly be used to capture Russian territories and strike peaceful Russian cities.

"If Washington and NATO countries supply weapons that will be used to strike peaceful cities and try to capture our territories as they threaten. This will lead to retaliatory measures using more powerful weapons. Members of the U.S. Congress, deputies of the Bundestag, the National Assembly of France, other European parliaments must realize their responsibility to humanity," Volodin wrote.

In his opinion, Washington and Brussels are leading the world "to a terrible war." with their decisions.

"Given the technological superiority of Russian weapons, foreign politicians who make such decisions need to understand this could end in a global tragedy that would destroy their countries," the Russian Parliament Speaker threatened.

He promised that Russia, which had previously allegedly struck "exclusively at the military and critical infrastructure" of Ukraine, would move on to "completely different military actions."

The meeting of the defense ministers of NATO and EU countries was held on January 20 at the German air base Ramstein and was mainly devoted to the supply of heavy modern weapons to Ukraine.

US Secretary of Defense Lloyd Austin, speaking at the summit, promised to support Ukraine "as much as necessary." Now is not the time to slow down, he said, and the allies will be unwavering in their determination to help Ukraine defend itself against the Russian aggression. Austin recalled that the United States pledged to provide a $2.5 billion aid package to meet Ukraine’s critical security and defense needs.

Following the meeting Ukraine was promised:

- missiles for patriot air defense systems, launchers and training of Ukrainian military in the Netherlands;

- NASAMS air defence system and its projectiles from Canada;

- 19 howitzers from Denmark ordered from France.

In turn, Latvia announced that it would provide M-17 helicopters, Stinger MANPADS, drones, and other equipment, as well as training for 2,000 Ukrainian military.

Estonia promised a $113 million military aid package, which will include dozens of FH-70 and D-30 howitzers, as well as hundreds of anti-tank Carl Gustaf grenade launchers with ammunition.

Finland announced the largest military assistance package since the beginning of the Russian invasion. For security reasons, the Finnish Ministry of Defense did not report what weapons will be included in the package. But it said that the total cost will be about half a billion dollars (more than 400 million euros). This is the 12th package of Finnish military assistance to Ukraine.

Earlier, nine countries – Britain, Estonia, Latvia, Lithuania, Poland, Denmark, the Netherlands, Slovakia, and the Czech Republic – signed the "Tallinn Declaration", in which they pledged to "support Ukraine in its heroic resistance to illegal and unprovoked Russian aggression" and "collectively seek global military assistance" for Ukraine.