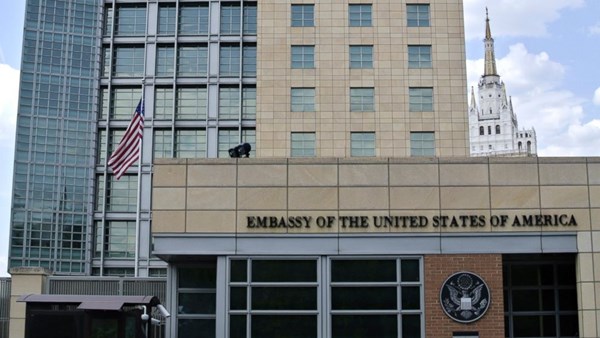 The US Embassy in Moscow may be given the address "One North American Dead End". A corresponding article is to be considered by the Mayor's office of the Russian capital. Novaya Gazeta reported on this on Monday, February 12, citing Mikhail Degtyarev, Chairman of the State Duma Committee on Physical Culture, Sport, Tourism and Youth Affairs.

Degtyarev said that Americans are trying to conduct "intrusive foreign policy" and thus "drive the world to a dead end."

"That said, the US itself is not a model of democracy. We see how National Guard troops are regularly introduced in America to suppress demonstrations, and how civil liberties are infringed," the official said.

According to Degtyarev, Moscow is an ancient historical city, unlike Washington with its "teen-age complexes".

"We will not rename the existing streets or even alleys for some momentary political ambitions. However, we could change the postal address of the nameless deadlock, which is very symbolic," Degtyarev said.

According to the publication, a meeting to discuss the address change will be held in February, to include the participation of a working group from the City Interdepartmental Commission for names of territorial units of Moscow.

At the same time, the US embassy in Russia prefers not to talk about dead ends, but rather concentrate on the development of bilateral relations.

"Anyone can talk about dead ends, but as US diplomats we prefer to focus on finding a way forward toward a more constructive US-Russia relationship," commented official Embassy spokesperson Maria Olson.

The publication reported that a member of the Liberal Democratic Party, Mikhail Degtyarev, had sent a letter to the mayor of Moscow in January with a proposal to give a name to the nameless inter-street passage along the US Embassy building.
The square in front of the Russian Embassy in Washington Square was recently re-named after Nemtsov.