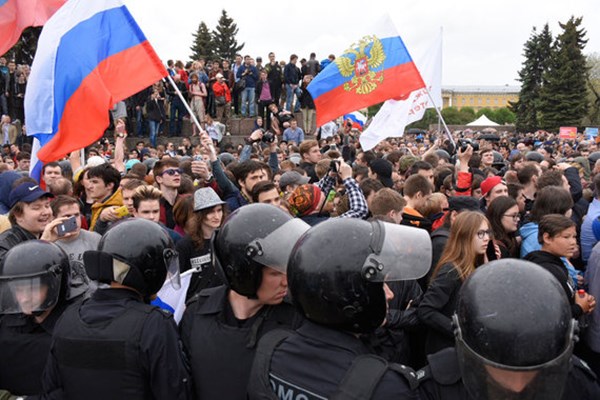 "A crackdown on peaceful protests across Russia in which hundreds of people were arrested and numerous others beaten by police demonstrates the authorities’ utter contempt for fundamental human rights," the human rights activists said in a statement.

Amnesty's Deputy Director for Europe and Central Asia, Denis Krivosheev, reminded that the right to peaceful assembly is guaranteed by the Russian constitution. He said he was concerned about mass arrests. "After trying to intimidate protesters into abstaining from these demonstrations with blackmail and harassment, the authorities in Moscow, St Petersburg and elsewhere have punished hundreds of those who turned up with beatings and arrests," he said.

According to Spicer, the United States strongly condemns the detention of hundreds of activists.

The European Union's foreign policy service called for "promptly releasing" the detained members of the anti-corruption rally in Russian cities. This was noted in the department's official statement.

"The detention of hundreds of peaceful demonstrators and violence used against them by the Russian authorities in Moscow, Saint Petersburg and other cities across the country today threatens the fundamental freedoms of expression, association and assembly in the Russian Federation," the statement said.

Additionally, the EU foreign policy service once more called on the Russian authorities to comply with international obligations, including obligations to the European Council and the OSCE, as well as to fully ensure the observance of the rights of detainees.

On June 12 (Russia Day), actions against corruption took place across the country. Russian police detained dozens of demonstrators. The largest detentions were recorded in Moscow and St. Petersburg. The list of detainees is published at ATS-Info, according to which only 825 people were brought to Moscow police departments.