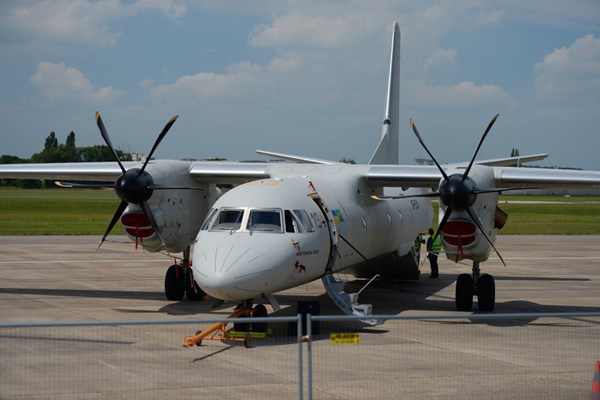 State Concern "Ukroboronprom" presented a new model of the An-132D transport aircraft at the international air show in Le Bourget on June 19, according to the company's website.

"The premiere of the new An-132 at the main International Paris Air Show Le Bourget 2017 was successful. Ukrainians do have something to be proud of," the message says.

At the air show, the airplane made its first demonstration flight; the second flight will be made on June 21.

The company noted that the plane was put together in record time. In May 2015, the aircraft production process began. On March 31, 2017, it made its first flight from Kyiv to Gostomel. The state concern emphasized that there is no a single Russian detail in this Ukrainian airplane.

During the development of the aircraft, Ukroboronprom worked together with partners from the USA, Canada, Great Britain, Germany, France and other countries.

The An-132 is designed for transporting cargo at short and medium distances. Its cruising speed is 500 km/h and its maximum payload is 9.2 tons.

Last year, the Antonov aircraft building company decided to suspend the production of airplanes due to a rupture in relations with Russia. Then, Deputy Head of the Enterprise’s Department of Advanced Development, Andriy Khaustov explained that to continue producing the aircraft it would be necessary to replace all Russian components.