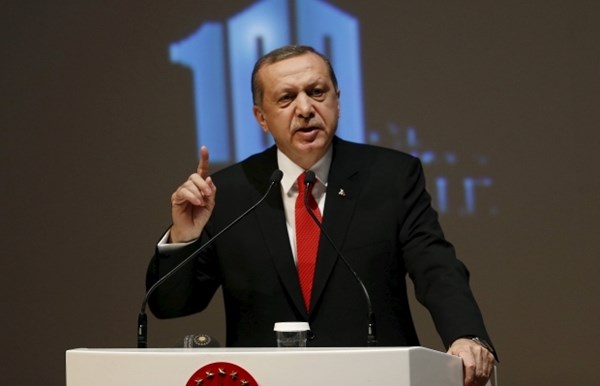 Turkish President Recep Tayyip Erdoğan stated that inter-Syrian negotiations in Geveva are meaningless as long as the troops of the Syrian President, Bashar Al-Assad, and Russia continue hostilities in Syria. “Russia continues to kill people in Syria. How is it then possible to hold peace negotiations?” he rhetorically asked, speaking during his visit to Peru on the 4th of February. “In a climate when people are killed, such efforts make no sense. They just ease the conditions for the tyrant,” Erdoğan added.

The Turkish leader sceptically commented on the negotiations concerning Syria. “They always gather, eat, drink and then leave. Now, the resumption of negotiations has been scheduled for late February. You will see when the 28th of February comes, they will announce another postponement,” Erdoğan suggested.

About 60,000 to 70,000 men, who were based in camps in the northern part of Aleppo, are now moving towards Turkey.  My thoughts aren’t in London now, they are with our border. I am thinking about how we will settle these new people from Syria,” Mevlüt Çavuşoğlu said. According to the Turkish Minister of Foreign Affairs, Mevlüt Çavuşoğlu, Ankara can expect more than 300,000 new refugees from Aleppo.

At the same time, Russia and the US confirmed that a ministerial-level meeting of International Support for Syria will be held on the 11th of February in Munich. The heads of the diplomatic agencies, Sergey Lavrov and John Kerry, have agreed to immediately take the necessary steps to give a new impetus to the stalled inter-Syrian negotiations in Geneva, the Russian Minister of Foreign Affairs reported on the 4th of February.

It is expected that the other countries involved in the inter-Syrian negotiation process will also be present at the meeting.