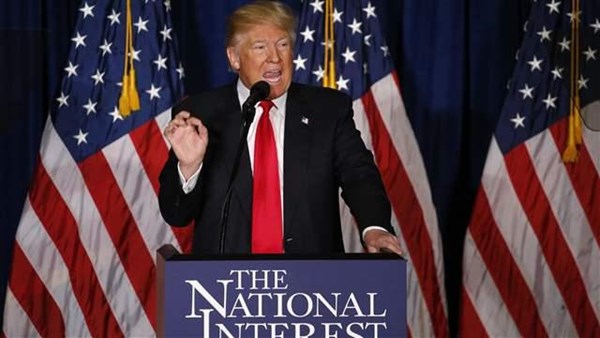 Republican Donald Trump presented to the public his foreign policy views under the slogan "America First.” If, as a president, he will not be able to negotiate with Moscow, he "will just leave the negotiating table."

In Trump’s foreign policy speech in Washington, the billionaire U.S. presidential candidate from the Republican Party did not mention Ukraine and said that he would be able to improve relations with Russia "from a position of strength." However, he did not answer the question of how that would affect the policy of sanctions against the Russian Federation, which the West adheres to after the annexation of Crimea. On Wednesday, April 27th, at an event organized by the Center for the National Interest, Trump also said that if, as president, he will not be able to negotiate with Moscow, Washington "will simply leave the negotiating table." At the same time, he noted that the United States must seek common ground with Russia and China "based on mutual interests."

The leitmotif of the statements made by Trump became the slogan "America First.” If he becomes President, U.S. allies in Europe and Asia will have to take care of their security by themselves, if they are not willing to pay much more for the protection provided by his country, Trump said. At the same time, he assured that under his leadership, the United States "again will become a trusted friend and ally." In particular, the Republican candidate described plans to organize two summits—for NATO allies and for Asia—to discuss the "change of balance" in the alliances to alleviate the financial burden of the United States.

"Shake off the rust"

The Presidential candidate expressed his intention to step up the use of military force to break up the so-called Islamic State, using strategy and tactics that they won’t expect. "Their days are numbered; I will not tell them where, and will not tell them how,” Trump said. “We as a nation must be strong and resilient. And they will disappear."

The politician has chided U.S. leaders about the extreme depletion of the country's nuclear arsenal and has promised to modernize it. "It's time to shake off the rust from American foreign policy," Trump said, reading his speech from a teleprompter. He criticized the actions of U.S. President Barack Obama on the world stage, calling them a disaster, but without giving details. Experts said that Trump's speech was populist, primitive and full of contradictions, noting that he is "selling a dream, and not presenting a plan."

On April 26th Trump won a convincing victory in the primaries, winning in all five states where the vote took place, in Connecticut, Maryland, Pennsylvania, Delaware and Rhode Island.