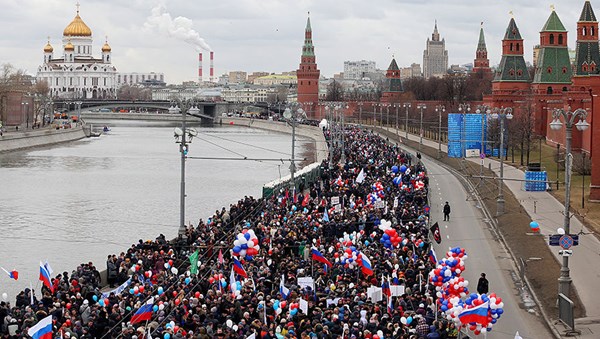 The traditional rally-concert in the center of Moscow will be held in a different place and format or it may not be held at all, Dozhd TV Channel reported, citing informed sources. Dozhd discovered that the causes were excessive formality of the event in past years, overcrowding of the city center and the desire of new leadership of the internal political block to abandon old formats.

It was the Presidential Administration who decided to refuse the established format of celebrating the Day of Accession of Crimea to the Russian Federation. One Kremlin official close to the Moscow Mayor’s Office and an interlocutor close to the leadership of the State Duma corroborated this in their interview with Dozhd TV Channel on condition of anonymity.

The celebration traditionally takes place on the 18th of March. The Agreement on Accession of the Crimean Peninsula to the Russian Federation was signed on that day. The rally-concert called “We are together!” was usually held at the Red Square in Moscow. Approximately 110,000 people gathered there. In addition to the performance of popular singers and politicians, Russian President Vladimir Putin would deliver a speech.

This format was followed almost exactly over the next two years. Last year, Putin did not visit the rally personally but the Russian President addressed the participants by video call from the Crimea, where he went to inspect the construction of the Kerch Strait Bridge.

This year, it was decided that the format is outdated. This event can’t be celebrated in the same way all the time, the Kremlin official says. Another unnamed official admitted that state employees were forced to visit the rallies and it gave an impression of excessive over-organization. The interlocutor close to the Moscow Mayor’s Office stated that they had to block the center due to the rally and it bothered other Muscovites.

The man close to the leadership of the State Duma revealed that a new team within the Kremlin’s internal political block decided to change the format of celebration. Since autumn, this Agency has been controlled by the First Deputy Chief of Staff of the Presidential Administration of Russia, Sergey Kiriyenko. Kiriyenko replaced Vyacheslav Volodin, who in turn became the Speaker of the State Duma. The new team wants to work in its own way and refuses to follow in the footsteps of their predecessors, the interlocutor said.

It is not yet clear how the event will be celebrated. The concert will probably be organized but it will be held neither in the center of Moscow nor at the Red Square, the interlocutor close to the Mayor’s Office stated. The celebration should become less organized and more youth-oriented, the interlocutor noted. The Moscow State University was previously considered as a possible site to hold the event.

As Dozhd TV Channel previously reported, the Kremlin had planned to hold the festival called “The Swallow’s Nest” in front of the main university building in honor of the accession of the Crimean peninsula.

The Deputy Head of the Kremlin’s Department of Internal Policy, Timur Prokopenko met with students and discussed the format of the event. The transcript of the discussion published on the VK page of the Initiative Group of Moscow State University shows that the Kremlin official invited students to become initiators of the concert and proposed to take into consideration all wishes in choice of artists.

“The scenario will be whatever you say. As for those who will perform at stage, you tell us who you would like to see among artists. I don’t know, Vasiliy Vakulenko also known as Basta, Timati, Alla Pugacheva, Lev Leshchenko—tell us who you like,” the transcript quotes Prokopenko as saying. Two participants of the meeting independently confirmed its authenticity to Dozhd TV Channel.

According to the students, officials emphasized that the voice of the students would dominate the event but at the same time warned that there would be several political speeches. “We can’t do this completely without them,” the Kremlin official stated and asked for understanding.

In previous years, the Civic Chamber of the Russian Federation filed requests with the Moscow Mayor’s Office for holding rally-concerts. When it became known that such a request was submitted, the relevant structures would begin an active information campaign to involve citizens in rallies. This year, the Civic Chamber has not yet received any instructions from the Kremlin, the Dozhd TV interlocutor said.

It is unlikely that authorities will refuse to celebrate this event. Political scientist Ekaterina Shulman stated that it would be inefficient for them to do that, especially one year before the presidential elections. According to all surveys, the issue of annexing the Crimea remains favorable for authorities and has festive features for Russians compared to all the other reasons for celebration, Shulman noted.

It is worth noting that evidence was recently released that proves the Kremlin had been preparing the annexation of the Crimea long before the events of 2013-2014 released. The information indicated that this would have happened sooner or later, regardless of Maidan.