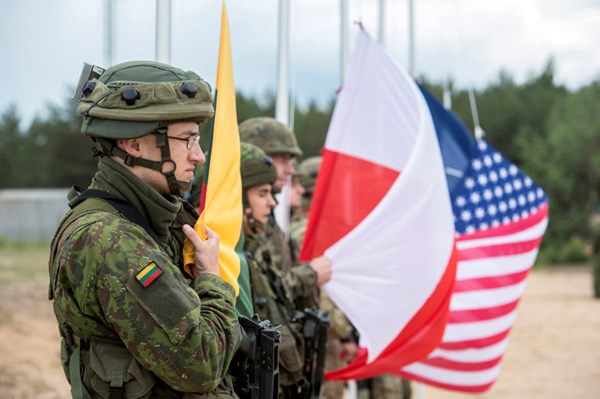 The second part of NATO’s Gelezinis Vilkas 2016 military exercise have begun at the Gaižiūnai site in Lithuania. Germany, Denmark, Lithuania, Luxembourg, the US and France will participate in these large-scale exercises. RBC-Ukraine states that this was reported by the press service of the Lithuanian Ministry of Defense.

“An international unit of the battalion level, which was established based on the Danish Armed Forces, will be tested during these exercises, which will then take on an operational duty as part of the rapid response force of NATO,” the agency said.

There is a total of 2,700 personnel participating in the Gelezinis Vilkas 2016. Also, this is the first time that the French military is taking part in the exercises.

During this part of the exercises, Leopard 2A5 tanks, self-propelled howitzers Panzerhaubitze 2000, Boxer armored personnel carriers and other military equipment will be used.

In the first phase of the exercises, 1,900 Lithuanians and 400 military personnel from the US and Polish National Guard practiced redeployments to a designated area, reconnaissance missions as well as defensive and offensive operations. These exercises occurred on the 6th of June at a military site near the town of Pabradė.

Gelezinis Vilkas 2016 is part of NATO’s Saber Strike 2016 exercise, which is held in Lithuania, Latvia and Estonia. It has been under the leadership of the US military command in Europe since 2011. A total of 10,000 troops are participating in the exercise.