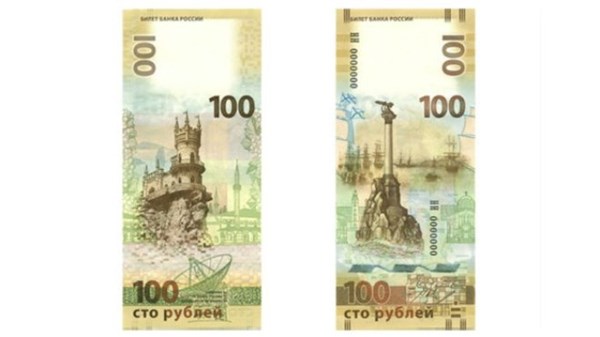 The design features an image of the famous Crimean castle Swallow’s Nest on one side, with the other side showing the Monument to the Flooded Ships in Sevastopol.

The Central Bank said it plans to print 20 million copies of the new banknote.

The Crimean peninsula was occupied and incorporated into Russian territory by Russian forces in early 2014. At the time of the annexation, a 100 ruble banknote was worth about $2.75. Due to numerous economic factors, including low oil prices and economic sanctions placed against Russia for annexing the peninsula, 100 rubles today is worth approximately $1.42, almost half of what it was in early 2014.

While the new currency is sure to provoke many in Ukraine and the West, it may also serve as a reminder of the price Russia has to pay for its actions in Ukraine. The US imposed a fresh round of sanctions against Russia on Wednesday, and the country’s economy continues to go from bad to worse.