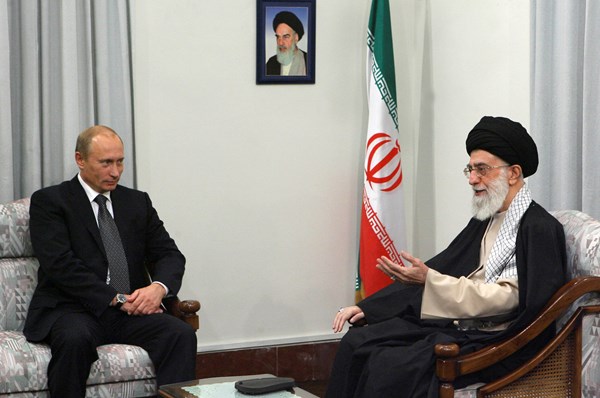 Experts express both consensus and disagreements about the Russian-Iranian relationship.

Moscow – Before the start of the Gas Exporting Countries Forum in Tehran, Russian President Vladimir Putin had a meeting with Iran’s leader, Ayatollah Khamenei. The meeting between Putin and Khamenei was broadcast on Russian television. The President of the Russian Federation stated the two countries have similar positions regarding the conflict in Syria.

“Nobody can or should impose any form of government on the Syrian people from the outside or say who specifically should govern it,” he said. “This should be decided only by the Syrian people.” During the meeting, Ayatollah thanked Russia for their assistance in mediating the international agreement on the Iran nuclear deal.

There are different opinions as to the resolution of the Syrian crisis in many countries, including the USA. As for the future of Assad, Barack Obama stated it was “not conceivable” that the Syrian president could “regain legitimacy,” adding that most of the country “despises Assad and will not stop fighting so long as he is in power.”

“Russia has not officially committed to a transition of Assad moving out, but they did agree to the political transition process,” noted Obama, speaking at Sunday’s press conference in Malaysia.

Putin has planned to meet with the President of the Islamic Republic of Iran, Hassan Rouhani, on Monday. An expert from the Carnegie Moscow Center, Professor Alexei Malashenko, in his interview with the Russian branch of the Voice of America noted the existence of disagreements between Russia and Iran. “Yes, Moscow is very serious about continued cooperation with Tehran and Dmitry Rogozin (Deputy Prime Minister of the Russian Federation) continuously talks about the necessity for Russia to remain in a strategic partnership with Iran, but these initiatives come only from Moscow,” he stated. Malashenko believes Russia needs Iran in order to continue its political influence in Syria.

“Putin is concerned that Iran will gradually drift to the West despite the Syrian war,” added the professor. “Tehran, if not an ally, could at least be a reliable partner in the region for Moscow, despite the conflict in Syria.”

However, according to Malashenko, Tehran plays its own game. “The Iranians overall, have had enough of Russia playing the role of mediator between them and the Americans,” he continues. “And now they are using Russia for their own purposes. Moscow thinks that they are playing Iran, but in reality Tehran is playing Russia. It's very important.”

That's why he believes it is not safe to assume that a continued Russian-Iranian relationship will be successful. “Because Tehran has an alternative,” he concluded.

Vladimir Putin's meetings with the leaders of the Islamic Republic of Iran resulted in two notable outcomes. First, Russia started the delivery process of the S-300 system to Iran, as reported by the Iranian news agency Tansim. Second, Putin issued a decree lifting the ban on providing equipment for Iran's nuclear program.

However, a Senior Researcher from the Institute of Oriental Studies (the Russian Academy of Sciences), Professor Vladimir Sazhin, believes that the delivery of the air defence system “is not yet worked out to the full extent.” However, as he explained to the Voice of America, “The fact that Putin and Ayatollah talked about it could be the final action ensuring that all obstacles were removed.” He goes on to say that, “After the fulfillment of the S-300 contract, it's completely possible that new opportunities will appear for the broader development of military and technological cooperation between Moscow and Tehran, but within the constraints of the international agreement on Iran’s nuclear program signed in Vienna.” Sazhin stressed that according to the agreement it's prohibited for Iran to export heavy weapons for the next five years and rocket technology for the next eight years.

“As for Putin's decree, I think it's dictated by the necessity for large scale repairs needed within Iran's nuclear facilities,” noted Sazhin. “And without the proper equipment it's just impossible to do.” In his opinion, there is an excessive bureaucracy in both Russia and Iran.

“To advance anything in a two-sided relationship, sadly, you need lobbying on a very high level. Putin's meeting with Ayatollah and the President Rouhani serves just this purpose; to push the execution of many accumulated agreements,” concluded Sazhin. At the same time he agreed with his opponent that Tehran and Moscow “have somewhat different approaches to a number of issues.”

“Although, they both support the current government in Syria, they still seem to have disagreements. Iran insists on preserving Assad's presidential position and demands preserving his position until a transition government is formed. Moscow sees this more liberally, if it could be called so,” summarized Sazhin.

The civil war in Syria has continued since 2011. During this time 250,000 people died and millions have abandoned their homes.