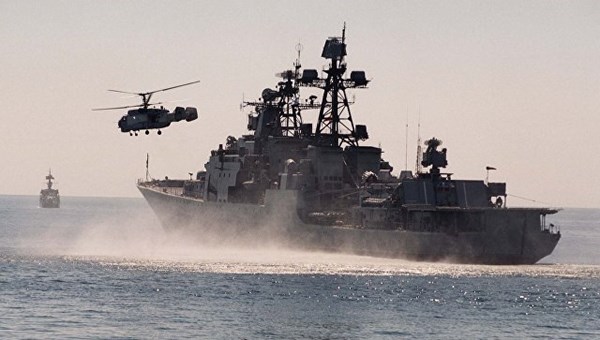 The Pacific Fleet ships that consist of a large anti-submarine ship, Admiral Tributs, and a Boris Butoma tanker have sailed off for the Indian port of Visakhapatnam to take part in the Indra Navy joint drills, Vladimir Matveyev, a spokesman for Russia’s Eastern military district, told TASS.

"The ships are under the command of the Deputy Commander of the Seaboard (Primorsk) Combined Forces Flotilla Rear Admiral, Eduard Mikhailov, and are currently heading to the base of the Eastern Fleet of the Indian Navy in Vishakhapatnam. The ships are scheduled to arrive at the Indian port on December 14th," he said.

According to Matveyev, the ships left the main naval base mid October. Since then, the ships have performed duty tasks in the Pacific and Indian Oceans, have taken part in the Indo Defense international arms exhibition in the Indonesian port of Tanjung Priok, and have visited Thailand’s port of Sattahip.

The drills will be held on December 14 through 21 in two stages. The coast phase will take place from December 14 to 18 in the city of Vishakhapatnam, and will include meetings on cooperation, the exchange of official visits and other activities.

The offshore part will be held from December 19 to 21 in the waters of the Bay of Bengal. Participants will work on communication, and will practice the defense against air attacks, night maneuvering of ships, artillery firing at air and sea targets. The Indian side will command the exercises.